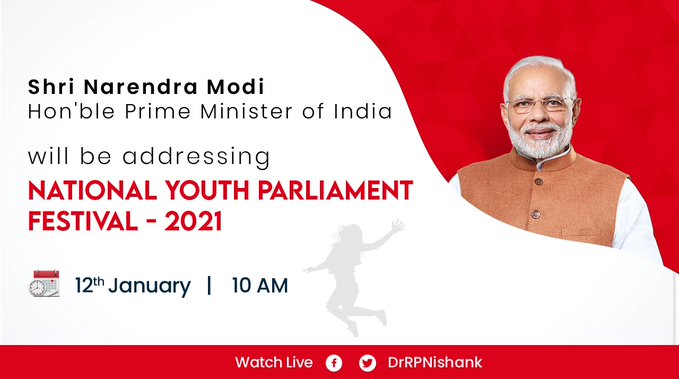 Education Minister, Ramesh Pokhriyal ‘Nishank’ informed the masses about this upcoming event. He also said that the National Youth Festival 2021 will go live on his Twitter and Facebook pages. Hence, to join the live festival, the username @DrRPNishank has to be searched on Facebook and Twitter.

Other participants of the National Youth Festival:

Qualified candidates from the State and district level will participate. The scheduled dates are 11th and 12th January 2021 for all participants. A total of 87 state-level winners will be the participants in the upcoming festival. Hence, these participants are first, second, and third prize winners.

29 participants who are the first position holders from each state will be speaking on selected topics. The remaining 58 out of the 87 will be simply attending and listening. Hence, they are not directed to be speakers.

The objective of the National Youth Festival:

Indian Youth from 18 years to 25 years will get a chance to raise their voice. Hence, they fall under the age group who newly gets their voting rights. However, they are not allowed to contest elections. Therefore, the primary motive is to encourage such youths and make them aware of public issues. They need to understand the common man’s day to day problems and articulately express their views.

DU TO PROVIDE RESERVATION TO OBC STUDENTS IN HOSTELS

The National Youth Festival is an attempt to bring the country together and create a Mini-India. Hence, youths from all sections will interact formally and informally. They will exchange their social and cultural uniqueness. Hence, all of this will develop the spirit of brotherhood and national integrity.