The students are encountering various problems and errors while performing the basic steps. A student of Delhi University says a bad request #400 constantly appeared on the screen for the first few trials. Also, it took two attempts to submit the test sheets online. Students also complained that the University did not inform them about the date sheet of mock tests. No information has been provided about mock tests for which subjects will be taken on what dates. 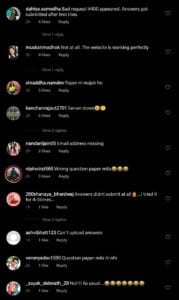 Students are also reporting that even after the postponement of test series for about 20 days, they have received wring question papers in the first mock test itself. Furthermore, there have been complaining that the Delhi University’s server is not responding while students are trying to take the mock test.

The mock tests being conducted by Delhi University are not based on the pattern which will be followed for OBE. The final year students say that these tests are wasting their time and efforts as the University is not following the OBE pattern.

Final year students faced various issues while the most common error #8 was incurred by myriad students. From logging in to the portal to submission of the answer sheets, almost every step in the process proved as adversity for students.

The University of Delhi has begun the first phase of the mock test from July 27 and will proceed till July 29. As for the schedule, there are all-around three slots for appearing for the mock test. The schedule various programs have been allocated different slots for mock tests for the three days.

COVID 19 THIRD WAVE MAY HIT IN NEXT 6 WEEKS : AIIMS DIRECTOR