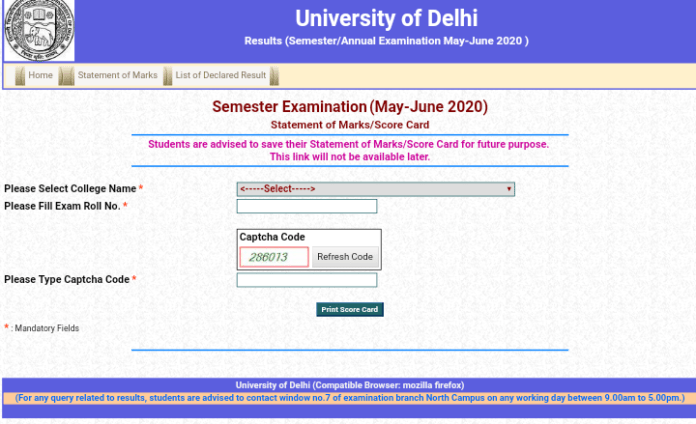 OBE (Open book exams) conducted by the University of Delhi despite great disapproval and dissent by both students and teachers front have now run into yet another fresh round of opposition and fix as many students from final-year who were eagerly waiting for their results have alleged that there were wrongly marked absent or allotted zero marks entirely. They expressed their disappointment and shock as this discrepancy would surely put their future in doubt or to be precise in a bleak uncertainty.

This move of conducting online open-book examinations as a one time measure in the wake of the pandemic for final year students was highly opposed and criticized as an unfair and inappropriate method of assessing already back then. Students and teachers staunchly opposed this move and despite this, the varsity decided to go forward with it.

Online OBE was conducted from August 10 to August 31 for around 260,000 final-year UG and PG students.

Varsity officials shared that they are trying to solve the queries of the students within three days of filing the complaint.

A student of Rajdhani College who was pursuing BCom(Hons) said that he was given 0 marks in two subjects and he pointed it out as a huge blunder and that this was not possible that he got zero marks in two subjects. He said that how was it possible to get zero when one has access to books also. He has taken admission in an MBA program in a private college of Pune for which his parents took a 16 lakhs loan. He is required to submit the result before 10 November and the institute will not let him continue with this result. This major blunder and discrepancy has put him in a huge fix.

Rajdhani College’s Nodal officer R.D. Sharma said that this was not a lone case. They have received many similar complaints from so many students where they have been marked either absent or given Zero. There were 5 such cases in the course of BCom (Hons) alone). University Examination Branch was contacted for this which said to forward the complaint with the answer scripts.

Nodal officers of other colleges also said that they have been receiving similar kind of complaints from the students.

AAROGYA SETU NOT MANDATORY FOR STUDENTS IN JNU ANYMORE