This year’s cutoffs released by University were much higher than last year’s and subsequent may be closed. So, students are showing good responses to the Delhi University admission 2021 on the first day itself besides the cent percent cutoffs.

WHAT DID PRINCIPALS SAY?

Dr. Rajesh Giri is the principal of Rajdhani College. He said that the admission process is going smoothly and response is encouraging. This year aspirants applying on the first day are much more than in previous years. As candidates want to reserve a seat in the Delhi University.

Deen Dayal Upadhyaya College`s principal said that the college has received 485 applications after the admission process began. The college has released a 100% cutoff for BSc Honours Computer Science. Then also, 16 applicants applied for the course having a total of 60 seats. 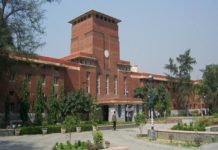