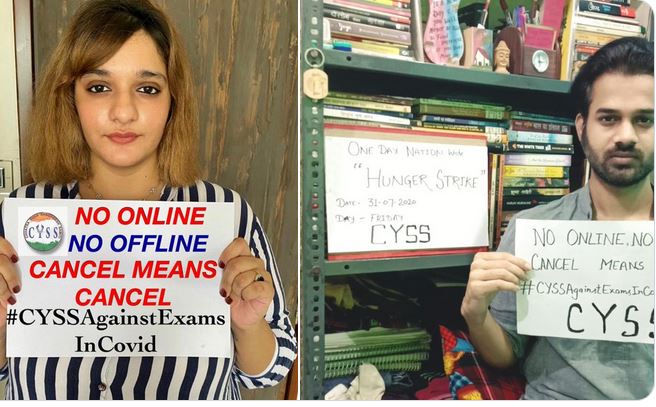 Members of Aam Aadmi Party along with CYSS are carrying out a hunger strike against online exams of final year students nationwide. Students from 15 different states are supporting CYSS.

Due to COVID-19, final year students have not yet appeared for their final semester exams. UGC released its guidelines that students cannot be promoted by just awarding a degree without exams. That degree will not have any value in the long run. But, it is not safe for the students to appear for classroom exams. If UGC plans to conduct online exams, there are many students who do not have access to proper internet connectivity and electronic gadgets. That is why students would not be able to appear for online exams either. Chhatra Yuva Sangharsh Samiti (CYSS) raised its voice in favor of the students.

STUDENTS DO NOT HAVE ACCESS TO PROPER INTERNET CONNECTION TO APPEAR FOR ONLINE EXAMS
Members of Aam Aadmi Party along with Chhatra Yuva Sangharsh Samiti is on a hunger strike since Friday fighting against the conduct of online exams. This hunger strike is being held nationwide. Students from 15 states in India are on a hunger strike against online exams. The General Secretary of CYSS Punjab said that the nation is suffering from the coronavirus pandemic since March. On the other hand, in order to appear for online exams, students do not have access to a proper internet connection and laptop or computer.

UGC GUIDELINES ARE NOTHING BUT AN AUTOCRATIC ORDER

In view of the conditions of the students of Allahabad University, the General Secretary of CYSS, Uttar Pradesh said that the guidelines released by the University Grants Commission are nothing but an autocratic order. An official of CYSS Delhi said that the decision of UGC to conduct exams in COVID-19 is like scaring the lives of young people.

Students from different parts of India are supporting CYSS on twitter. Anurogendra Nigam, the National Coordinator of CYSS said in support of the students that “Sitting in the AC room doesn’t play with students’ lives. Wake up UGC.” Vijay Fulara is a member of the Aam Aadmi Party He suggested UGC to neither take online exams nor offline exams. People said that they would not let UGC conduct exams. They will protect the lives of students. Conducting exams in such a pandemic situation is like taking risk of the lives of students. Everybody is demanding to cancel exams of Final Year Students. A hashtag #CYSSAgainstExamsInCovid is being viral on twitter with the support of students, AAP members, and CYSS.