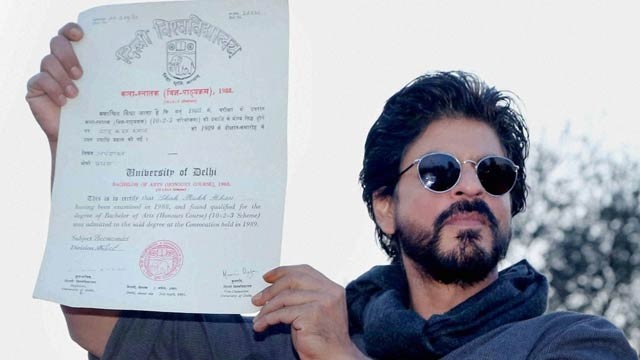 Delhi University remains in headlines all the year with unusual happenings and great achievements. This is a quick glance of top headlines from the university last year. University decided to go completely online in the admission procedures, in the year 2016. Although, this change took place in the year 2015 only but offline applications were still there. The official website for online procedures is contributed by the students Delhi University.

Getting a seat in Delhi University is not less than a fight for kids. In 2016, game changes for all as in many colleges, seats for many courses went vacant, later due to which DU releases 3 more cutoff to fulfil the available vacancies. Delhi university student, Tina Dabi became IAS topper for the year 2014-15. She has created a history with her rank one at the very first attempt. Dabi is a political science graduate from LSR. Bollywood superstar Shahrukh Khan received his graduation degree from Hansraj college, after 28 years. He talked about his college life and shared some memories back from the Delhi lanes. Delhi University started an option for transgenders to seek admissions in undergraduate courses. Application goes centralized and created biggest opportunity for people under the category. Prime Minister Narendra Modi Degree’s conflict had created one of the biggest highlights of the year 2016. The authenticity of the undergraduate Degree got questioned. Later, Delhi University acknowledged the legitimacy of the Degree. This time not the University’s Student Union but Delhi University Teachers Asscociation made their fights against the central government for their rights. The issue raised for the extended working hours. Students of Law Faculty, University of Delhi received maximum limelight of the year. The matter of delayed admissions and then the attendance and results issues, related violence prevailed in the Faculty throughout the year. 9. Entrance based admissions for B.COM

Delhi University recently announced, to start the entrance based admissions for B.COM courses from next year onwards. University will regulate written entrance exam for the seats.

There is no any current News for this. It was a year for Delhi University to give the best in food culture as Shyam Lal College announced the second edition of University chef (cooking competition for all student) and for the first time ever, students of Hansraj college introduced the Culinary Art Society. Delhi University enjoyed the best of presence from Bollywood in 2016. Aditya Roy Kapoor, Shah Rukh Khan, Hrithik Roshan, Ranveer Singh, Vaani Kapoor, Farhan Akhtar and the count wouldn’t turned off from B-town and made it all for the University crowd from fests to movie promotions and event nights.