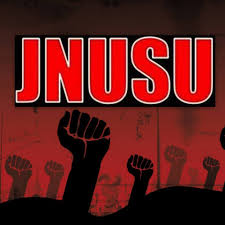 An indefinite sit-in has been started, at the university gate, by the Jawaharlal Nehru Students’ Union (JNUSU), demanding a phased return of students to the campus.

JNUSU, on Saturday, took out the Unlock JNJU March from the Chandrabhaga Hostel where more than 100 students participated in the march and a subsequent dharna.

The dharna staged by the students marked the culmination of the march at the North Gate.

The JNUSU office-bearers addressed the march Including the General Secretary Satish Chandra. Chandra said that students must be allowed inside in a phased manner. In December, the researchers have their submission. The hostel rooms stand double-locked, in which many students have their books and laptops. Without such crucial things, how is research even possible? The JNU administration must ensure proper SOP, including quarantine and testing facilities.

A temporary tent near the main entrance has been put by the students. The whole night was spent by them over there and they have resolved to stage the sit-in until the university administration starts calling the students back to the campus.

IP UNIVERSITY TO RECONSIDER ITS DECISION TO CONDUCT LAW EXAM

A panel has been formed by JNU to work out guidelines on ensuring a phased return of students to the college campus.

WHAT LEADS TO COMPETITION AMONG DELHI UNIVERSITY ASPIRANTS?