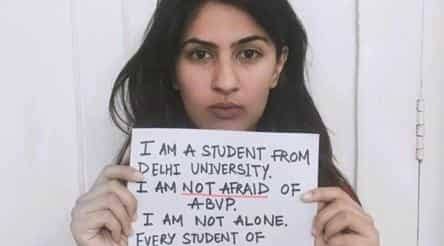 Gurmehar Kaur, a student activist is looking for a full-time position in Journalism, social impact, and intergovernmental organizations.

Gurmehar Kaur was born on 24 September 1996. She is an author and a student activist. In 2017, there were some clashes at Ramjas College between the members of the All India Students Federation (AISF) and Akhil Bhartiya Vidyarthi Parishad (ABVP). This is the case when the campus invited JNU students Umar Khalid and Shehra Rashid Shora to a seminar.

GURMEHAR KAUR WAS THE PART OF ‘SAVE DU CAMPAIGN’

Gurmehar Kaur came in the limelight at that time. She was a part of the ‘Save DU campaign’ at the time of clashes. She received many death and rape threats when she started the campaign and later she left. Her father was Captain Mandeep Singh. She lost her when she was two years old. Her father was killed in a militant attack on a Rashtriya Rifles camp in Jammu and Kashmir in 1999, in the aftermath of the Kargil War.

GURMEHAR KAUR SAID PAKISTAN DID NOT KILL HER FATHER, WAR DID

In 2016, she launched a campaign called #ProfileForPeace supporting amity between India and Pakistan. She released a video that was viral later. In her viral video, she said that Pakistan did not kill her father, the war did. She made use of placards and spoke it took a long time for her to understand the difference and let go of her hate for Pakistan. In her placards, it was written about questioning the calibre of both the countries. It read, “we cannot dream of becoming a first world country with third world leadership.” She suggested the government of both the nations, India and Pakistan to stop pretending and solve the problem.

GURMEHAR KAUR IS IN THE LIST OF “10 NEXT GENERATION LEADERS”

Gurmehar has completed her under graduation in English honors from Lady Shri Ram College of Delhi University. In 2017, Times Magazine included Kaur in the ” 10 Next Generation Leaders” list. While expressing the opinion of Kaur, Times Magazine used the phrase “free speech warrior” for her. She also wrote a book, a memoir called Small Acts of Freedom. Penguin Random House published the book in January 2018.

Gurmehar is pursuing her post-graduation from Somerville College of Oxford University. She is also an ambassador for Postcards for Peace. It is a UK based charitable organization that helps to eliminate any form of discrimination.

GURMEHAR KAUR IS PURSUING HER MASTERS FROM OXFORD UNIVERSITY

Now, as Gurmehar is pursuing her post-graduation from Oxford University, she is in search of a full-time position in journalism, social impact, intergovernmental organizations or policy think tanks. She has 4 years of experience in politics, journalism, and campaigning.

A BJP LEADER COMPARED HER WITH DAWOOD IBRAHIM