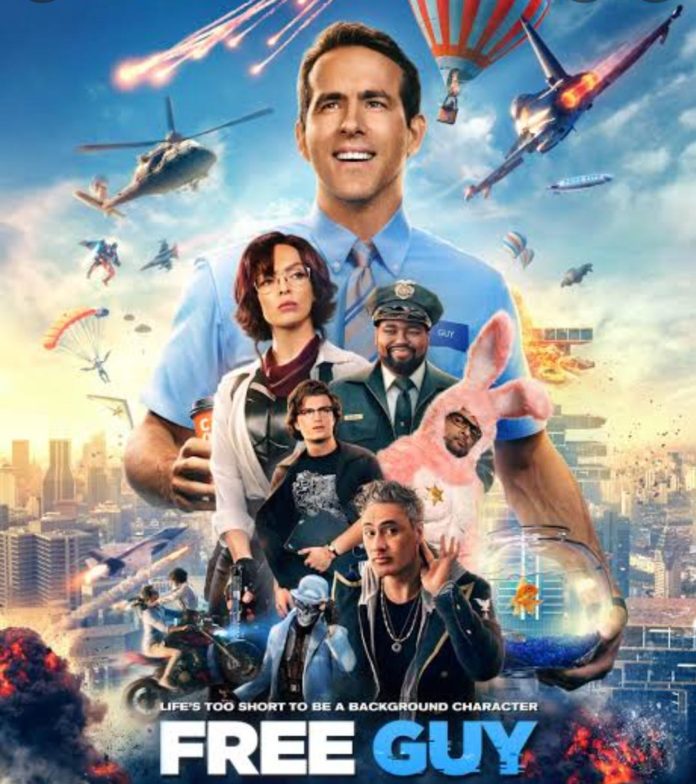 Free Guy movie, directed by Shawn Levy was released in August 2021. Hence, the movie is science fiction (sci-fi) jam-packed with lots of action and comedy. Free Guy Movie stars Ryan Reynolds as the lead character Guy. The movie is all about Guy, a bank teller who discovers that he is a background player in an open-world, multiplayer game. Hence, he decides to rewrite his story and become a hero in it. Thus, in the game world, Guy gets determined to save the world in every possible way.

More about the Free Guy movie:

Free Guy Movie is all about a non-playable character (NPC) in a multiplayer game who has bigger dreams than he is programmed for. Apart from being a hero in the game, Free Guy also saved his friends from getting deleted in the game by its creators.

Guy, the lead is more of a hyperactive puppy, easy to like, and fun to hang out with. Throughout the movie, Guy is portrayed as a loved character who helps everyone and does silly things like running around in circles, losing focus, and ultimately falling. As for the Free Guy movie review, it is a family action movie that targets the Fortnite Generation. Also, Free Guy movie preaches the importance of individuality. Hence, with an enjoyable cast, lots of action, and a gaming perspective, the movie is a must-watch.

Free Guy movie is about how in a video game named Free City, a background character named Guy becomes a hero. Hence, he loves his life, says good morning to his goldfish, buys coffee, goes to work at a frequently robbed bank with his best friend. This continues for all the days as Free Guy was unaware that he is an NPC. However, he hopes of meeting someone special and meets Molotov Girl, a gamer. Thus, in order to spend time with her, Free Guy steals a pair of glasses and starts to level up. Guy chooses the path of doing good deeds rather than committing any act of violence. In the real world, all gamers become Guy’s fans and his acts become internet famous. Antoine, a crooked game developer tries to shut him and eliminate all non-playable characters. However, Antoine had stolen the game from another developer named Keys. Thus, Keys recognizes Guys’ behavior and the artificial intelligence technology.

The ratings given by the critiques on the scale of 5 are as follows:

These are the reviews given by a bunch of critiques:

One person says that Ryan Reynolds (played the Free Guy) has done justice as a video game character. Certain parts of the movie are quite inventive, with funny star wars jokes and others that give it a highly comic effect. Some critiques really liked the character of the Free Guy. Thus, they have a view that Guy is admittedly derivative, has a huge heart, is sneakily sly.

But, some critiques gave dicey reviews like the movie has less originality and a lot of technical acumen. Hence, not everyone liked the gaming aspect but some non-gamers even went to the extent of picking up the controller and playing games. Bottom line is that the movie is worth watching and it is completely subjective if the watcher likes it or not.

One of the major parental concerns is if the movie is okay for their kids to watch. Here, free guy movie is a gaming movie that definitely entices kids from all age groups. However, parents need to know that the movie is quite bubbly and cheerful with lots of positive vibes and plenty of giggles. Hence, the movie is recommended to everyone from the age group of 13 and above. However, some content consists of violence and explicit that is inappropriate for kids. Thus, it has video game-type violence along with shooting, falling, explosions, accidents, and car crashes. Also, the character of Molotov Girl has a certain appeal and there is some sexual innuendo and sex-related dialogues. Also, sometimes foul language with f words is used. Hence, all this can come under the vicinity of parental concern.

Is the movie worth your time?

Shawn Levy, the director has done an outstanding and admirable job keeping the movie always clicking with the audience through various entertaining scenes in the 1st part. But, viewers think that in the 2nd part, the movie starts losing pace and circles back on the same plot. The director has kept the movie appealing by drawing out the natural charisma of his cast. Reynolds is hands down an amazing actor loved by everyone. But, Comer came as a real breakthrough, perfectly holding both, the action-driven scenes as Molotov Girl and the character-driven one as Millie. Hence, her effortless switch in accent, body language, and role is worth appreciating.

Free Guy movie has a perfect playground for physics-defying action and also narrative freedom. Thus, gamers who turn to the virtual world while escaping their own have mostly enjoyed it. Although the movie touches on artificial intelligence with its remarks on gamer culture, the tonality never gets too peachy. Hence, the movie is filled with satisfying gags and breathtaking action mixed with a scoop of warmth. So, all of this AI, gaming, action, and more makes the movie worth watching. Easily available on Hotstar, the movie is perfect for a Sunday night movie spree.

WHY YOU SHOULD WATCH MOVIES ON UWATCHFREE?