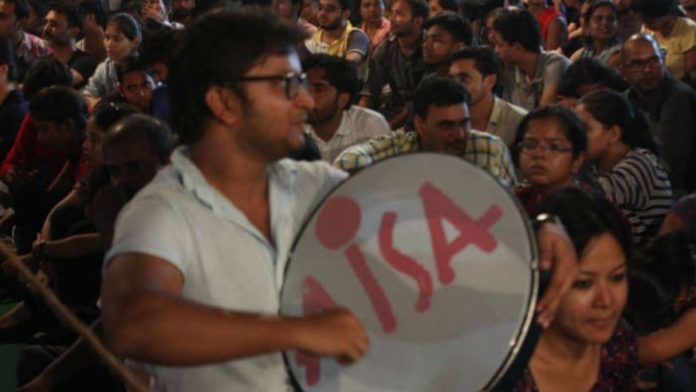 The All India Students’ Association (AISA) on Tuesday conducted a rally on North Campus and released a “report card” on four years of the Modi government.

The ‘report card’ was the result of an opinion poll, which saw participation by 21,000 DU students. The survey assessed the policies of the Modi government based on various criteria, including jobs, placement, accommodation, gender violence, infrastructure, campus violence, academic freedom and social discrimination.

The association said 83% of the participants expressed dissatisfaction with the Modi government.

“The survey, which was carried out in 30 DU colleges, proves that students believe the Bharatiya Janata Party (BJP) – Akhil Bharatiya Vidyarthi Parishad(ABVP)  regime has been the most anti-student regime. It has not only spread hate, attacked universities, and assaulted teachers and students but also destroyed academic freedom on campus,” AISA said.

DU’s AISA president Kawalpreet Kaur added, “It is clear that DU students believe this regime has been the worst and should be ousted from both the Centre as well as the Delhi University Students’ Union. AISA will fight to uphold the mandate of the DU ‘report card’. We appeal to all anti-ABVP forces to come together to send a message to the anti-student Modi government and defeat ABVP in DUSU.”

Reported by The Hindu