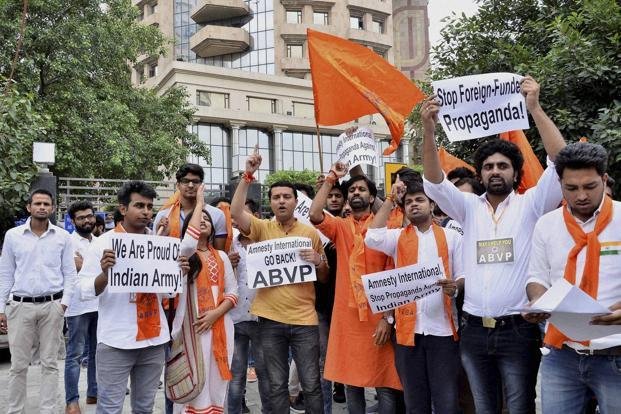 At the DU admission office, there is an ongoing AVBP protest. The RSS-affiliated Akhil Bhartiya Vidyarthi Parishad (ABVP) members have started a sit-in protest on October 6. Hence, the reason for their sit-in protest is the inflated results given by state boards this year. So, the ABVP demands that amidst such a crisis, the varsity should introduce a fair entrance process.

The ABVP protest has been going on for almost 24 hours now. The protesting students stated that they are waiting for a meeting with the DU VC and other officials. Also, this meeting was supposed to happen at noon, October 7.

The ABVP protest began on the night of October 6. Hence, students were promised a high-level meeting including officials from the admission committee, and the executive council members. Also, other representatives from students unions including the Delhi University Students Union (DUSU) protesting alongside ABVP was a part.

But, the meeting didn’t take place as the Vice-Chancellor had to go elsewhere. So, the students are still waiting for his return.

ABVP protest: Here is what they said

They stated that there has been a huge compromise in the quality of education and the uniformity of the DU admission process. Also, they added, “We are sitting outside the office of Dean Students Welfare.” Hence, their protest will continue until their demand is met. ABVP wants DU to call off the ongoing admission procedure as it has failed to provide a level playing field to students. So, they want a normalization of state board marks.