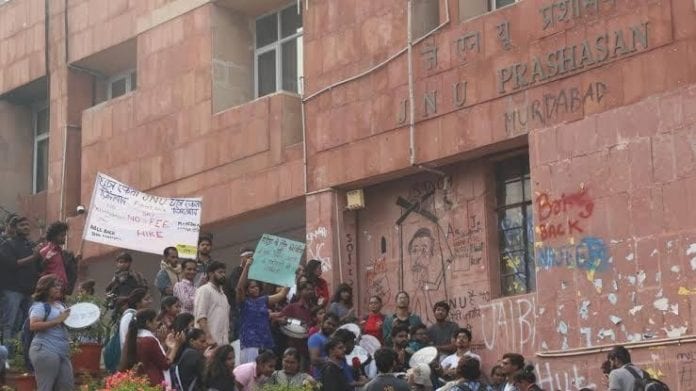 On Monday, the Jawaharlal Nehru University (JNU) strongly notified stranded students who are residing in JNU hostels to return to their hometowns as the special trains and interstate bus services have been resumed following relaxations in the lockdown due to coronavirus.

After the notification, the Student Union confronted with the administration. The Student Union further opposed the advice saying that University is gradually putting the lives and safety of stranded students in danger.

The University in response to the Student Unions deposition said that some self-declared leaders always strive to make a mountain of a molehill. They seek to oppose every advisory issued by the administration and give an idealistic color to it.

In a handout,  Professor Sudheer Pratap Singh, the Dean of Students stated that the University had issued a notification in the month of March as well, for informing students about the closure of the University due to lockdown and advising them to vacate the hostels bad go back home.

The handout further stated that the students made a request to the administration to let them stay back in the hostels at that time due to the unavailability of the transport facility during the lockdown.

The recently released notification stated that the Indian Railways has now started running some special shramik trains and around 200 more trains will come back into operation from June 1.

Furthermore the notification stated that intrastate taxi and bus services have also been resumed by the government. Moreover, various state governments have also made available transport arrangements to help stranded students reach their homes.

Moreover, according to the guidelines issued by the Ministry of Home Affairs and Delhi Government, the Jawaharlal Nehru University has notified that students can return to the JNU campus on or after June 25 and hence till June  25 all the academic activities are neared.

The circular further stated that this notification is to emphasize the daily updates furnished by the Government of India about the Coronavirus pandemic situation. The number of Coronavirus cases in Delhi are rising swiftly with every passing day.

The circular added that all the stranded students who are at present residing in JNU hostels are hereby strongly advised to vacate the hostels and return to their hometowns and arrive back to the campus after the opening of the University.

The student union denounced the University’s circular in a statement. The Student’s Union stated that in these times when everyone should unite and stand together, such notifications by the university are not only asking the students to risk their life and jeopardizing their safety but also taking us near to the destruction due to Covid-19.

The University in riposte to the Students Union’s statement asserted that advisory’s circulars and notifications have always been regarded as problems and issues by the Student Union. The University further added that the argument raised by the Students’ Union is objectionable and indefensible and can discourage the students willing to go back home.