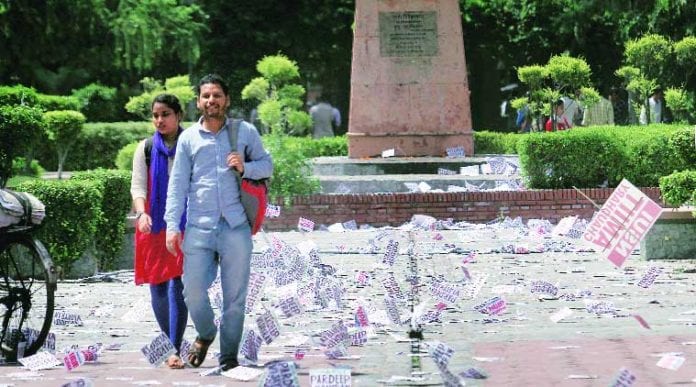 In the wake of the COVID-19 outbreak and the lockdown announced by the government, the Delhi University Students’ Union, or DUSU, has requested Delhi Chief Minister Arvind Kejriwal to give a special package for the students and waive rent.

On behalf of the Delhi University students, the DUSU contends that the DU students residing in rented accommodations and as paying guests (PG) are being forced to pay rent by their landlords. Moreover, the students residing in these lodgings have also been asked to leave their PGs or rented houses and take their belongings. Many students are facing this problem, as they had already left for their hometowns after the announcement of lockdown in mid-March, has also been asked to evacuate their PGs and rented lodgings.

DUSU on June 4 issued a statement that reads that DUSU along with the 128 college representatives has urged a special package for the students of Delhi University (DU) and asked for some policies to give relaxation to the students through writing a letter to the Chief Minister of Delhi.

The statement issued by DUSU further reads that the students who had left for their hometowns must be provided with a financial package as a concession through the direct money transfer to their accounts.

President of DUSU, Akshit Dahiya, in the statement, said that as a responsible, credible and student-friendly DUSU, it is our responsibility to ensure that students are not hampered in this situation of crisis. Akshit Dahiya further added that Hence DUSU has requested the Chief Minister of Delhi for the provision of a special package and hopes that the government would take this into its contemplation.

Initially, an online campaign had announced by the Student Tenants’ Union, Delhi, against payment of rent during the period of lockdown. According to a survey conducted by the Student Tenants’ Union on 1,069 students in Delhi, about 69.3 % of students said that they are being forced to pay the rent during the lockdown. Around 28.1 % of students are being threatened with eviction for non-payment of rent and 34.3 % threatened with forfeiture of their security deposit. About 62.8 % of this survey were women respondents.

The Student Tenants’ Union, Delhi, will effort to draw attention to this issue by posting on Twitter with hashtags #NoRentFromStudents and #NoIncomeNoRent. The students’ group has issued a statement voicing its concerns regarding tenancy, rent, harassment, and eviction threats by landlords amidst the lockdown.