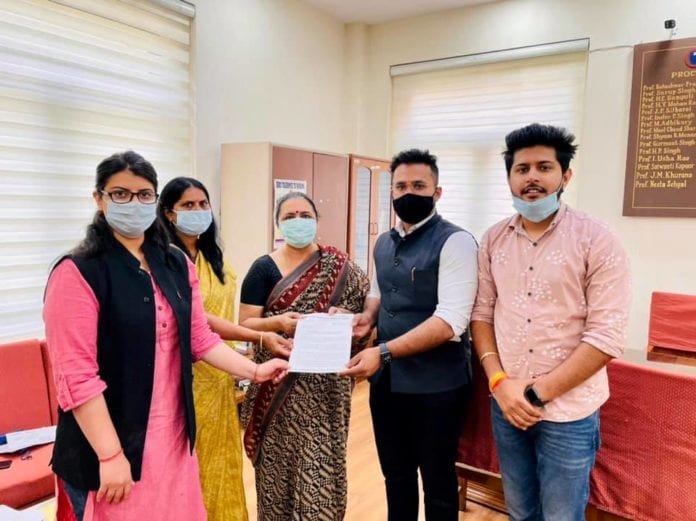 A memorandum has been submitted by DUSU (Delhi University Students’ Union) to the Proctor of Delhi University in which they have demanded actions against social elements who were involved in violent and anti-national activities on the occasion of Women’s Day, i.e. 8th March. A complaint has also been filed by DUSU against such elements in the local Maurice Nagar Police station.

On the occasion of International Women’s Day, ‘Bhagat Singh Chatra Ekta Manch’ was organized by students. According to DUSU, it was an anti-national nefarious event.

The memorandum submitted by DUSU reads that it was heart-breaking for them that several posters with titles like ‘Indian Army Rapes US!!’ were displayed publicly in broad daylight in the Arts Faculty campus of Delhi University. The defamation of the protectors of the Indian borders and sovereignty- Indian Army-through slogans like ‘Indian Army as Rapists’, etc. were raised without any regard or fear of law-enforcement machinery, fear of the law, or public order. The constitution framed by Babasaheb Bhimrao Ambedkar Ji was also ridiculed and disrespected by several slogans.

The memorandum also mentions that the criminals turned violent and harshly treated the girl students when the responsible students along with the security guards of Delhi University tried to stop such seditious acts. There are several girl students who have been physically and sexually assaulted.

Shivangi Kharwal who is the Joint Secretary of DUSU was attacked while was raising her voice against those criminals.

DUSU has also made certain demands in their memorandum. They have demanded that the involvement of outsiders and anti-national parties in the University space should be restricted. In any case, the Constitution should not be desecrated. In order to ensure peace and tranquility on the campus, necessary steps must be taken. Special steps must be taken to ensure the safety of girl students. Immediate and necessary action must be taken against the accused in this case.