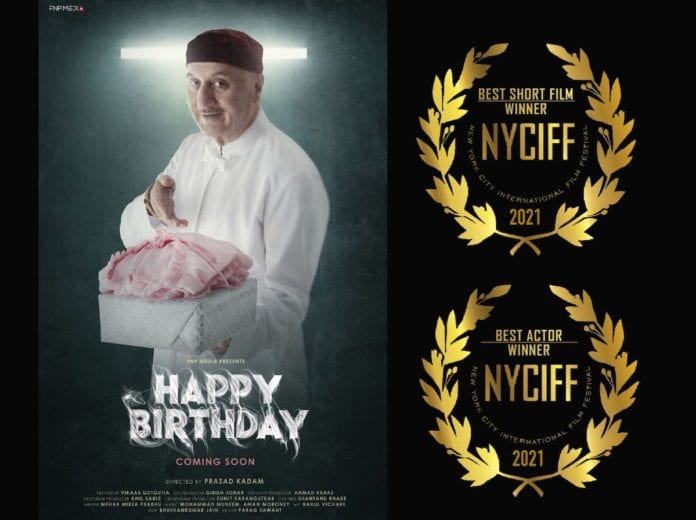 Sharing the news with his fans and admirers about his Best Actor award at the NYCIFF he expressed his Happiness. The host city of NYCIFF was Seville, Spain and it conducted the event in a virtual mode. Informing his followers that his Short Film Happy Birthday has won the Best Short Film award at the film festival, Anupam Kher expressed his excitement.

In one of his insta posts, Kher expressed his happiness on winning such a prestigious award.

Actor Anupam Kher and his co-star in the short film, Aahana Kumra have collaborated for the second time. As we know, they worked together/ shared the screen space in the accidental Prime Minister before this.

The short film Happy birthday revolves around a man experiencing numerous feelings as a result of his attachment to one thing he loves.

The film was nominated at the NYCIFF under four categories. Namely Best Short Film, Best Director, Best Actor, and Best actress as well. The film could bag two awards at NYCIFF.

Anupam Kher’s wife Kirron Kher was recently diagnosed with Cancer. The couple also made a public appearance post-cancer diagnosis for the first time during COVID-19 vaccination.

Political drama, The Kashmir Files is his immediate next work. Secondly, The Last Show under Vivek Agnihotri’s direction is also there in his upcoming projects.