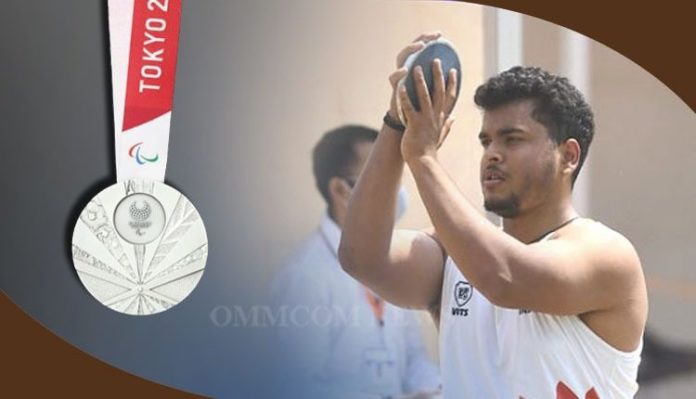 Yogesh Kathuniya has won the silver medal for India in Tokyo Summer Paralympics 2020. He has done this wonder in the discus throw. He bagged the silver in the men`s discus throw final F56 category on Monday. Yogesh`s best attempt was 44.38m, from which he came on 2nd spot.

Later on, in his sixth attempt and the final attempt, he gave his season`s best throw mark. Yogesh has mounted on the top of the tally in 2nd attempt. Yogesh`s 2nd attempt was 42.84m. After that, he came up with 43.55m in the fifth attempt. These discus throws landed India on the silver mark in the Paralympics.

From these attempts, Yogesh Kathuniya has given the country laurels to celebrate. After his historic performance, countrywide gratitude is being expressed to him. He became a true inspiration and pride of a country overnight with his achievement in the Paralympics. From Prime minister to other celebrities all are in a row to congratulate his victory and making the nation high with pride.

After the Tokyo Olympics, now Paralympics India is marking itself with its athletes on the map of a sports-oriented nation. These wonders on such a platform by our athletes are elating the country. The shine of these medals is brightening the nation and the future of sports so easily. 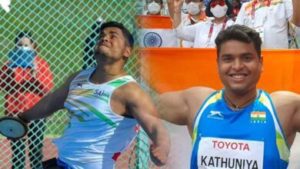 Yogesh Kathuniya has become a star of the country with his silver medal. Now talking about Yogesh`s details. As already mentioned name of the medalist is Yogesh Kathuniya. He is from Haryana, India. Yogesh was born on 3rd March 1997 in Delhi. He is now 24 years old. He has a height of 5 feet 10 inches, weighs 68 kg.

Yogesh was born to a housewife Meena Devi. His father`s name is Gyanchand Kathuniya, a soldier in the Indian army. He has been from a good middle-class family in Haryana. Raised by his parents with so much adorning since his infancy.

HIS LIFE INCIDENT, TO PARALYMPICS

At the age of  9 years, Yogesh`s life has drastically changed and from there it was the turning point. He suffered a paralytic attack at an early age. It was so serious that it left coordination impairments in his limbs. The paralytic attack resulted in a rare neurological disorder, Guillain-Barre syndrome.

After, the consequent quadriparesis limited him to a wheelchair in the year 2006. However, his fighting spirit was not confined to that much only. Further, his mother Meena Devi enrolled herself to learn physiotherapy. Her mother`s spirit was so devoted that within three years.

Yogesh was able to regain his muscle strength back to some extent. This made Yogesh walk on his legs with himself, without any support at the age of 12. However, all this had made him a differently-abled person. Gradually then after he started living his normal life and continued with his studies.

Yogesh has done his schooling at the Indian Army School, Chandigarh. During his school days, he was good at his studies. Moreover, his father had served at Chandimandir cantonment in the city.

Later on, for his graduation, he moved to Delhi. He has done Bachelor of Commerce(B.com) from Kirori Mal College, University of Delhi.

While his college days in 2017 he got into the para-athletes and later pursued it as a full-fledged career.

DEVENDRA JHAJHARIA: AN INSPIRING JOURNEY OF SWEAT AND BLOOD

After that Yogesh never looked back and focused only on his games. As the University of Delhi has also allowed him to persuade sports as a career. During that time his ability was noticed by several coaches.

Then he came under the guidance of coach Satyapal Singh at the Jawaharlal Nehru Stadium. Moreover, by the time he was also trained by a coach Naval Singh. However, during the Tokyo Paralympics 2020, he is not with a coach from the last year.

Yogesh had represented India first time at the Para-athletics Grand Prix in Germany in 2018. At that stage, he had created a world record in the discus throw in the F36 category. He marked his throw at 45.18m, which is 2m more than the last world record.

Moreover, he has won the bronze medal in the discus throw at World Championships in 2019 in Dubai.

Now come with the silver medal at the Paralympics in Tokyo 2020.

YOGESH WORDS AFTER THE MEDAL

After securing silver he said, this was amazing. Further indicated with words that winning silver has motivated me to win gold at Paris 2024.

Yogesh stated that I missed the gold from just 1m, but going to get it next time. He was happy for making the country proud with his sports spirit.