Wikipedia, one of the most popular websites needs money. The fundraising drive has sparked heated discussions. Everyone wants to know the reason behind this “awkward plea”.

Since 2001,  Wikipedia has grown beyond measures. The website perfectly serves its users to access the biggest online library. For millions of people around the globe, the website is a  one-stop solution to all detailed answers.

When the alarming request displayed on our screens,  asking for donations, all the users seemed perplexed. From this year,  the website Wikipedia is asking for money so that it could run smoothly.

We ask you, humbly: don’t scroll away,” the message, now pinned atop every Wiki page, reads. “We depend on donations from exceptional readers, but fewer than 2% give. If you donate just? 150, or whatever you can. Wikipedia could keep thriving. Thank you. 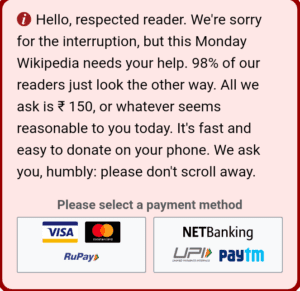 According to Wikipedia’s founders, the website aims to provide free knowledge to all its users. However, with the recent donation drive, Indian users are quickly realizing the cost of ” free knowledge”.

Wikipedia is unlike other free sites that have had to change their business prototype over the years to ensure their survival by peddling ads, instead, it has become one of the few successful free knowledge sites left on the Internet, in large part because it’s supported by readers around the world, a spokesperson for Wikimedia Foundation, Wikipedia’s parent organization, asserted.

According to the reports, Wikipedia.org encountered 5.2 billion visits in July 2020. Also, it is the eighth-most used website in the world.

The reason behind this donation drive

In a recent blog, Pat Pena, the director of Payment and operations of the Wikimedia Foundation gave some clarifications regarding this. He wrote Reader donations are critical to supporting Wikipedia’s global presence, Pena wrote, To meet the needs of readers in India and around the world, we regulate an international technology infrastructure identical to the world’s largest commercial websites.

The website is an initiative under the nonprofit Wikipedia Foundation.  A large network of volunteers including writers, editors, engineers, and others work for this unit. Because of their sincere efforts, the website furnishes accessible free knowledge.

Since Wikipedia does not carry any advertisements, it depends almost completely on donations made by its millions of readers around the world. A tiny slice of the website’s total revenue is generated from merchandise, including t-shirts, pencils, notebooks, and pens embossed with Wikipedia’s branding.

With the money it develops through these contributions, Wikipedia is able to keep its servers running and also retain the site and ensure that it is secure, loads shortly, and protects user data. Generous donations from its huge user base also help the site maintain its independence.

The website is run fully by a team of around 250 employees and over 250,000 global volunteers. In 20 years, Wikipedia has amassed over 50 million articles in nearly 300 languages. While donations help pay the salaries of its staff members, the volunteers provide their services to the website for free.

Fundraising campaigns and generous corporate endowments, Wikipedia’s aids have grown exponentially. Given its considerable net worth, many have criticized the website for the doomsday-eEsquetone it acquires in its call for donations. Asked about the same, the spokesperson for the Wikimedia Foundation said, As a website that hundreds of millions of people have come to rely on, we have a duty to ensure Wikipedia remains accessible, up to date, and pertinent for its readers.

We hope the public in India, and in other countries, will consider making a contribution to Wikipedia with the same goal, and with an eye towards the future; it’s also the reason why our messages are written in that spirit.

A charitable website of this scale needs a constant influx of donations. According to a detailed report shared by Wikimedia Foundation in 2019, about 49% of its annual financial gains was spent as direct support to the website; 32% was used for training, tools, events, and partnerships for its network of volunteers; 13% was spent to recruit and pay its staff members, and the remaining 12% was used for its various fundraising initiatives.

It is not unusual for large nonprofits like Wikipedia to continuously add funds to its reserve, which acts as a safety net if required, a Washington Post report noted. Charitable organizations are enabled to maintain an adequate cash reserve in excess of their annual expenditure in case of an adverse situation. So if a backer suddenly pulls out or if costs improvement, the nonprofit isn’t left high and dry, as the Nonprofits Assistance Fund has pointed out in the past.

While the ongoing pandemic criticized and has choked businesses across industries, it has presented a new opportunity for the website. Wikipedia has found an uptick in the number of people turning to the site as a reliable source of information during the health crisis. Billions of people around the world are set to come online in the next few years. This pandemic has expedited that trend, and the Foundation’s fundraising program is meant to help us address the new and thrusting challenges that will come with that tide, the spokesperson said.

How To Earn More Money With An Accredited Wellness Coach Certification

Is it the first donation drive by Wikipedia?

Wikipedia’s recent donation drive is most certainly not it’s first. The charitable website is supported by its readers across the world and depends on their donations to survive. Fundraising campaigns are carried out at specific times every year in most parts of the world.

According to Pena’s blog post, readers in India flock to Wikipedia more than 750 million times a month, the fifth-highest number of views the site obtains from any country. Given the readership garnered in India, it is rather unexpected that Wikipedia launched its first full-fledged fundraising drive in India only this year.

Due to the coronavirus pandemic, which seems to have brought life to a mincing halt for millions across the world, Wikipedia was compelled to delay the fundraising campaign it had planned for spring, this year. The reality is that we are now only into the first eight months of a pandemic that the World Health Organisation has said will last longer than they originally thought. So this crisis has forced us to approach our fundraising program with an excess of vigilance, the spokesperson said.