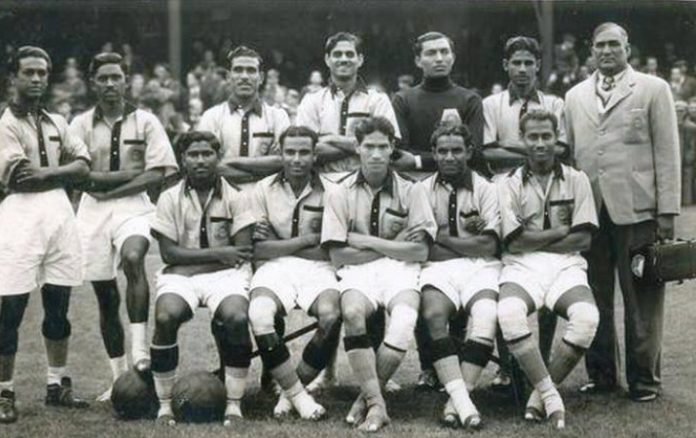 India was never considered a football nation, but almost 70 years ago, it miraculously qualified for the 1950 World Cup held in Brazil. FIFA allocated one World Cup spot to an Asian country. That was India. India got a place in the tournament without any games after the Philippines, Indonesia, and Burma teams refused to qualify because of possible high travel expenses to Brazil. There are several versions of why the Indian team never went to Brazil, including some crazy ones, which some still believe.

India ended up qualifying, where they were placed in a group with Italy, Sweden, and Paraguay in the final stage but never played a single match against them. There are various myths about the development of this story.

At the 1948 Olympics, the Indian team performed with bare feet, although field hockey players wore shoes.

In 1947, India gained independence from Great Britain, and a year later, the national football team traveled to the Olympics in London. Most of the Indian players played barefoot there, which surprised many spectators. However, this did not prevent the Indian team from playing decently against France in the first round of the football tournament. Indian players lost to the French with a score of 1:2, and the French team was able to score the winning goal only at the very end of the meeting. Such matches are even more enjoyable when you win bets, and such services as liontips.com/tips help with tips on the most popular games.

Curiously, at the same Olympics, the Indian hockey team played in footwear. And they won. Field hockey is more prevalent in the country than football, and India always won Olympic medals in this sport until 1980.

Two years later, the Indians won a spot in the World Cup in Brazil. According to one version, the All India Football Federation (AIFF) declared that the national team would play the tournament only barefoot. This way, Indian footballers were more comfortable playing because they had been running with the ball without shoes since an early age. FIFA, of course, did not like it. As a result, Indian footballers were banned from playing in Brazil without boots. But that was far from the main reason behind India’s non-participation in the tournament.

Initially, the 1950 FIFA World Cup was scheduled to feature 16 national teams: eight European, five South American, two North American, and one Asian. Apart from India, Turkey and Scotland were not represented in Brazil. Thus, only 13 national teams have taken part in the tournament’s final stage, which is considered the smallest number of teams in the history of World Cups.

For India, only the Olympics mattered. Three national teams refused to participate in the 1950 World Cup.

But there is another version of what happened. According to Sports Illustrated research in the country, the AIFF declared that the football squad would not take part in the FIFA competition due to “disputes above team choice and lack of practice time.” However, in an interview with Sports Illustrated, Kausik Bandyopadhyay, assistant editor of Indian Football and Society magazine, said that at the time, the Indian football federation did not understand the importance of participating in the World Cup in Brazil.

“Thorough research shows that underneath the obvious financial difficulties cited as the reason for not participating was the inability of AIFF to appreciate the importance of participating in the World Cup despite assurances from the organizing committee that they were bearing the bulk of the cost of traveling to Brazil,” the Indian sports journalist said.

Thus, FIFA was willing to pay for the Indian team’s trip to Brazil as they were keen to see the country as participants in the tournament. But the federation did not take participation in the World Cup seriously as for them, getting to the Olympics was always an important goal.

Sailen Manna, the defender of that Indian team, confirmed this fact in an interview with Sports Illustrated: “We didn’t know anything about the World Cup then. If we had been better informed, we would have taken the initiative ourselves. For us, the Olympics was everything. Nothing else existed for us,” said the 80-year-old former Indian footballer.

So it’s safe to say that playing barefoot wasn’t the only and far from the most plausible version of why the Indian team didn’t go to Brazil. At the same time, had the Indians made it to the World Cup, football in that country would now be at a completely different level.

Since then, the Indian peninsula country has never qualified for a World Cup final. In 1954, due to a conflict between the Indian Football Federation and FIFA, the Indian team was not even allowed to qualify for the World Cup. India currently occupies 106th place in the FIFA rankings.