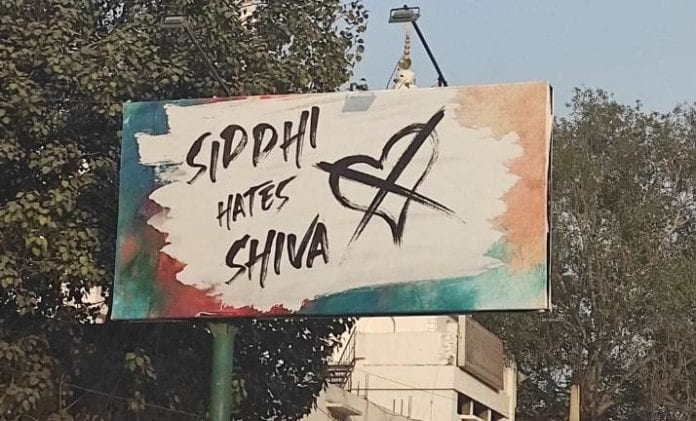 Proposals and PDA are nothing unheard of. (Are you mumbling “been there, done that”). Cause what we caught held of hasn’t been done before, or has it? Confused? So are we! Have you ever liked someone? (lame! Of course, you have. Have you ever hated someone? hell yes! How about declaring it to the world? Crazy enough.)

In the month of love and with valentines week around the corner, an open declaration of hate took over to streets, hoardings, and billboards close to valentine’s day, and it, for obvious reasons, struck people with surprise and dilemma and in no time social media platforms are flooding with tweets, memes, opinions and curiosity about the same.

If you too have come across one “Siddhi hates Shiva viral banner” then you are aware of the context and we are on the same page and if in case you still have no clue about it, then dear friend either you haven’t hit the roads in long plus your social media detox is going quite apt. Well to rescue you if you feel a FOMO, keep reading.

No! Sonam hasn’t gone bewafa again. Hang in there. She’s probably doing quite well. This time it was certainly the other way round. A love story has gone wrong, so it seems, a girl openly declares her hatred and disappointment over a guy, probably ex. But the way she did, truly unprecedented.

If we say that the poster that read “Siddi Hates Shiva” with a heart struck off has become the new sensation then we won’t be mistaken.

Siddhi hates Shiva viral banner which can be seen all over the city, on buses, metro pillars, cars, cabs, and where not. Siddhi hates Shiva viral banner is everywhere you can think of. Netizens took to social media platforms and shared their views on the same, their creativity in the form of memes, and their curiosity attaching images of wherever they came across one.

Netizens have posted all snapshots from their cities speculating and stating varied possible reasons behind this. Some presume it to be another one in the same lane as Binod while others call it Sonam Gupta bewafa hai 2.0.

Back in the year 2016, a very similar thing trended on the social media platforms where a 10 rs note was circulating with “Sonam Gupta bewafa hai” written on it. It took social media by storm and Sonam Gupta soon became no less than a sensation. That was great content for members and standups. Owing to the extent to which it became viral, last year actor Jassie Gill, around October 2020, shared a picture on his Instagram account revealing the name of his new film, Sonam Gupta Bewafa Hai.

The film starring Jassie gill and Qubool Hai fame Surbhi Jyoti will be hitting theatres soon. Other details about the same are yet to be revealed.

Despite all kinds of speculations being put forth on the micro-blogging website, Twitter, people are still curious about who this jilted lover is and no one knows who is behind the posters.

WHO IS SHWETA MEME GIRL : THE NEW SOCIAL MEDIA TREND

On one side where many claim it to be a marketing strategy/ stunt to catch the attention of the netizens other are interested to know what did Shiva do to get Siddhi to hate him. If this is a marketing ploy, or if it’s about a new web or TV series like others allege then we must say that the person behind this has aptly struck the right note.

Allegedly, very soon a new show is going on air on Colors called Bawara Dil which will bring forth an uncommon story of love and hate proceeding in and around the lives of the lead characters shiv (played by Aditya Redij ) and Siddhi ((played by  Kinjil Dhamecha).

With time, the real story behind this new sensational move may unveil. But if you too are equally on the edge to know why Siddhi hates Shiva be it a marketing strategy for a new campaign for a brand, show, or film then you have just hit the right note, we are quite on the same page.

Above all, we probably have got the kindest of Twitteratis who get concerned about almost everything. Be it Sonam, Binod, or Siddhi and Shiva we have so many out there taking care of the humor quota and fun of our lives. Blessed, aren’t we? Have a look!

WTF is going on here???
Can someone tell me???#Siddhihatesshiva pic.twitter.com/D002bUA8rJ

Can anyone tell me what is this #SiddhiHatesShiva all about?
Valentine day aa raha hai anything special?? pic.twitter.com/332UQOcpu0

@TheLallantop see this , in north east delhi's bhajanpura , there is a banner on roadside. And then i found the same on backside of a dtc bus. 😂😂#SiddhiHatesShiva pic.twitter.com/dd3z82tsgU