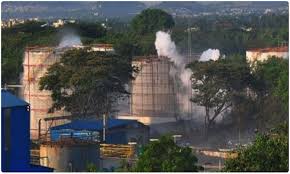 Styrene vapors leaked from a chemical plant in the area of Gopalapatnam in Visakhapatnam on Thursday. In that disaster, 11 people died in which 2 were minors and hundreds of them felt sick. Women and children are the worst affected in that disaster and 22 people out of which 10 are children are found to be critical. The leak occurred at the LG Polymers unit at RR Vishakhapatnam Village between 2:30 am and 3:00 am and spread over a radius of 3 to 5 km. It affected at least 5 villages. 1000 people living near the plant were evacuated and some even complained of skin rashes and burning sensations in the eyes. About 800 people were hospitalized many have been discharged till now.

People have to suffer due to that disaster: Thousands of people would up choking on Thursday morning and start running to safe places before sunrise. They even tried to contact the police and disaster response team for help. Some could not tolerate the files and collapsed on roads. Some felt unconscious at their home. All the living beings we’re affected with this disaster. Even cats dogs birds collapsed and leave burnt. The government ordered to open all the private hospitals to meet the emergency.

Financial help by the Chief Minister:  In the view of such a huge emergency and all the losses occurred, Andhra Pradesh Chief Minister sanctioned Rs.30 crore towards ex-gratia and financial assistance to all the victims of the Vizag has leak incident. Moreover, the Government has announced that Rs 1 crore would be granted to the kin of the deceased and compensation package for the sick. He also said that who so ever is affected by the styrene leak, will get all the Medical insurance facility. In a Video Conference on Friday, Chief Minister YS Jagan Mohan Reddy ordered the officials to release ex-gratia amount to the victims and their families. ( Ex-gratia is a voluntary payment made without any liability).

The appearance of senior officials: Due to this, the Chief Minister said that the Pollution Control Board should be strengthened and also directed the officials to check out all the hazardous factories located in Vishakhapatnam. There were many senior officials present in the review meeting including Chief Secretary Nilam Sawhney, GDP Gautam Sawang, Vizag City Police Commissioner RK Meena, and District Collector Vadarevu Vinaychand. The officials started that 60 percent of the chemical already polymerized and the rest will be done within 18 to 24 hours.