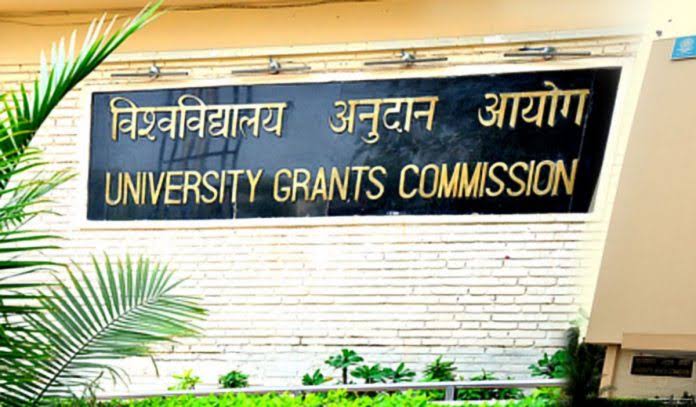 UGC’s directive released on 6th July is opposed by the state government. The directive stated that final year students have to give written exam if they want their degree.

The Educational institutes are closed since March. Whenever it opens, a cloud of uncertainty would prevail.  Because the coronavirus pandemic hasn’t ended yet.

The UGC’s updated guideline issued on 6th July raised many crucial questions. Under the guidelines, all the educational institutions have to conduct exams for the final year students by the end of September.

The guidelines are in direct conflict with many state governments. Delhi, Tamil Nadu, Uttar Pradesh, West Bengal, Odisha, Rajasthan, Haryana, and Pondicherry are the at which declared the cancellation of the final year examinations. Due to the pandemic, these state governments took this decision.

The UGC “revised” its guidelines as the ones it granted on April 29 had not accounted for the pandemic lasting as long as it has. However, they are applicable only to the terminal year or semester examinations. The prior guidelines have been maintained for other examinations. Further, while the earlier guidelines were “advisory” in nature, the tone of the revised ones have an element of force and compulsion.

The new directions seem to have the go-ahead of the Ministry of Home Affairs (MHA). A press release the MHA issued on July 6 and an Office Memorandum the Ministry of Human Resource Development (MHRD) issued on a similar day had identical interpretations of the UGC guidelines.

Criticisms from States over UGC’s guidelines

The new guidelines are highly opposed. At least 4 state governments, teachers’ associations,  and students’ bodies showed their disagreement with this. Seeing the rising COVID cases, they unitedly defied the new guidelines.

Mamta Banerjee, The Chief Minister of West Bengal, wrote a letter to PM Narendra Modi. In the letter, she stated that after consulting all the stakeholders and Vice-Chancellors, the state issued an advisory. On 26 June, the advisory was released. All the state-affiliated colleges and universities were asked to due weightage to the internal assessment and the performance of the aspirant in the prior semesters in order to ensure transparency.

The PM was asked to reexamine the updated guidelines and restore the earlier advisory.

Chief Minister Edappadi K. Palaniswami of Tamil Nadu expressed similar concerns.  He wrote to the HRD Minister. Moreover, he reminded him that the UGC had in its April 29 guidelines given universities and colleges “flexibility” to conduct examinations without any restrictions, guidelines, or ways from the appropriate government or authority.

Also, he pointed out that many colleges have been transformed into COVID Care Center.  Even some colleges acted as quarantine centers as well.

The chief Minister wrote that apex authorities such as the UGC and the All India Council for Technical Education could be ratified to endorse the respective decisions of the State governments which would be based on the regional prevailing COVID-19 conditions.

Furthermore, the Delhi government has also decided to cancel the exams for all students. Final years’ will be evaluated on the bases of prior exams. And,  intermediate students on the basis of internal assessments.

Sham of an Exam

Delhi University Teachers Association (DUTA) interpreted the UGC’s move as forcing a “sham of an exam” on students by legitimizing the Amazon-run DU-Open Book Exam method of examinations, which teachers had been rejecting.

The DUTA felt that it defied logic to insist on examinations for final semester students while allowing first-year and second-year students to be examined on the basis of internal examinations.

It pointed out that final year students had been entirely assessed in previous semesters and internally assessed for the current semester and could handily be awarded degrees on the basis of this if first and second-year students could be “passed” with a much more restricted assessment and without an examination.

The All India Federation of University and College Teachers Organisations (AIFUCTO), slammed the UGC guidelines for being self-contradictory, echoing the DUTA’s arguments by highlighting the fact that the guidelines were applicable only to final year students who had gone through several rounds of formal evaluation and assessments while pursuing their courses and not to students at the earlier and more foundational stages of courses [who] were evaluated to a much lesser extent.

The FEDCUTA argued that a combination of their [the students’] past assessment and internal assessment was more likely to serve as an accurate index of their overall learning and performance and therefore provided a sounder basis for the award of degrees than examinations in the current extraordinary conditions posed by the pandemic.

It was pointed out that teachers and students have opposed it as they felt that it was “discriminatory” and promoted “dishonesty” and would lead to a distorted assessment that would be skewed against honest students and those from underprivileged backgrounds.

Such examinations also would have no provisions for keeping out unfair means and malpractice like cheating, thereby undermining the credibility of the degree being awarded, the FEDCUTA said. Teachers also asked why there was an emphasis on examinations rather than on learning as part of the education process, which stands completely disrupted given the severe limitations of online exams.

The Yuva Sena is headed by Aaditya Thackeray, who is a Cabinet Minister in the Shiv Sena-led coalition government in Maharashtra. Thackeray has also written to the UGC and the MHRD on two occasions requesting them to call off the final year examinations given the spread of the pandemic.

The deep interest of the MHA in ruling on the necessity of final semester examinations, even as its own national COVID-19 management guidelines and directives do not yet allow the reopening of educational institutions for face-to-face teaching and learning, raises captivating questions about the intent behind the UGC directive.

The contention that academic standards have to be upheld does not quite hold water given the inconsistencies within the guidelines. Any end semester examination only evaluates students on what they learned in the courses prescribed for that particular semester. If a degree is likely to be significantly subverted by the elimination of one among several end semester examinations taken over a course of study, how does it matter whether it is an intermediate or a final semester examination that is dropped? This is the kind of issue that neither the UGC nor the Central government seems inclined to answer.

NSUI CONDEMNS THE WORKING OF DU REGARDING OBE