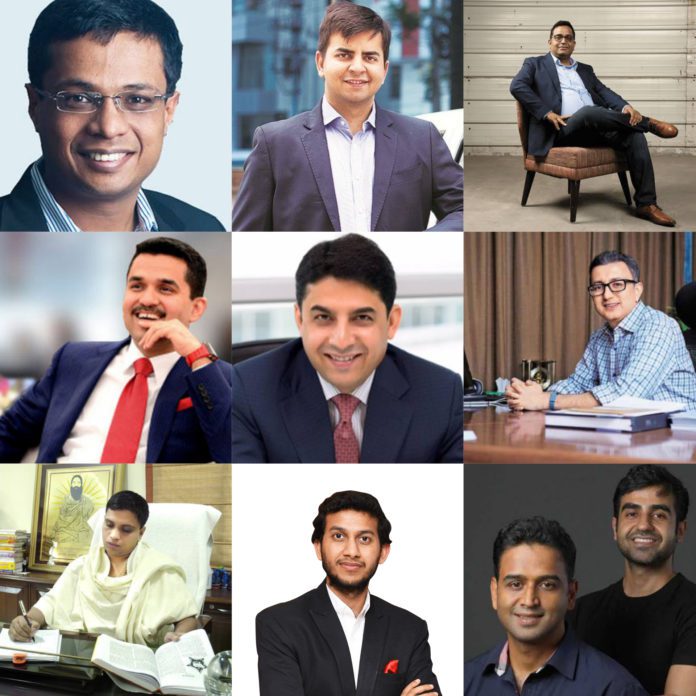 While most of us strive to be successful, there are hundreds of people who have achieved success and become billionaires.
Their success stories have made them role models or inspirations for today’s generations. It is the result of the hard work put in by them that has made them worthy of the heights they are at today. Given below is the list of the 10 youngest billionaires in India.

Ritesh Agarwal is the founder of all India hotel and lodging aggregator ‘OYO’. In 2013, he originated ‘OYO’, which within a few years became a giant in the field of hospitality.

The COVID-19 pandemic has hit the tourism and hospitality sector globally, and OYO has also been no exception. Although Ritesh Agarwal’s wealth has declined by 40%, he is still one of the top 10 youngest young self-made billionaire Indians with a net worth of Rs 4,500 crore.

The life story of 43-year-old Vijay Shekhar Sharma is no less than a feature film. Being the son of a school teacher from a small town in the northern parts of India to becoming India’s richest and youngest billionaire, his journey is indeed an inspiration to most of us.

Moreover, he founded India’s most used mobile wallet, Paytm, in 2011 to make the payment system in India more digital and easier to access on mobile. Currently, he holds a 16 percent stake in the company.
He is also credited with the creation of Paytm Mall and Paytm Payments Bank, to include more things in his field of work.

Paytm has around 250 million registered users and daily people do 70 million transactions through Paytm. Everything is enrolled in this app, be it mobile recharge, booking movie tickets, metro card recharge, or donating to a social cause (Kerala floods), you can do everything with just one click.

Shamsher Vayalil is the Founder and Managing Director of VPS Healthcare, a network of hospitals, clinics, and pharmacies. He is also on the list of the Youngest Billionaires in India. He was born in Kerala to a business family, Shamsher was interested in medical studies since childhood. He obtained his education in Medicine and later did his MD in Radiology.

However, after obtaining his education, he moved to Abu Dhabi and functioned as a radiologist for a year. In 2007, he opened his initial hospital and later diversified it into a full-fledged business in several regions including India.

Also, VPS Healthcare owns the whole chain of renowned Rockland Hospitals in Delhi. At the end of 2017, he acquired a 22 percent stake in Amanat Holdings, an investment firm, and came to be its VP and Managing Director.

Bhavish Aggarwal is ranked among the top youngest billionaires in India. Most of you must have used the services of Ola Cabs, a startup begun by Bhavish Agarwal, a citizen of Bangalore. Ola Cabs was organized in 2010 and is the largest cab service provider in our nation.

Sameer Gehlaut is one of the Youngest Billionaires in India. He is the Chairman and Managing Director of Indiabulls Group, is considered to be one of the youngest first-generation businessmen to be made through his hard work. He is one of the most enduring success achievers in India’s business community.

An engineer from IIT, Delhi, Gehlaut took his company to the fore, and it was because of his visionary and engaging leadership that the company emerged as India’s most diverse and successful conglomerate. It is his dedication that has taken Indiabulls to the pinnacle of success.

Bengaluru-based billionaire Ranjan Pai has carved out a niche in the Indian healthcare space, putting him directly in front of the market leader Apollo Hospitals. 48-year-old Ranjan Pai is a young doctor by profession who is the Chairman of Manipal Education and Medical Group.

The group focuses on medical, research, and healthcare. It consists of 6 colleges and 16 hospitals. Also, there are more than 1 lakh students enrolled in this renowned Manipal University, Campus in Dubai, Malaysia, Antigua, and Nepal.

According to reports, Pai is planning to acquire a stake in an Indian joint venture with US-based Cigna to expand its business for health insurance.

Acharya Balkrishna, chairman of Patanjali Ayurved, is an incredible story in itself. How he became famous by teaching yoga to people and then became a billionaire powerful industrialist, for which he certainly deserves praise.

From being a yoga guru to running one of the fastest-growing FMCG companies in India, Balakrishna’s life journey serves as an inspiration. In the time of scientifically made products, he has made the people of the country’s blood and sweat move towards his Ayurveda-based products. However, he holds a 98.6 percent stake in the company, which he co-founded with yoga guru Baba Ramdev.

Nithin Kamath and Nikhil Kamath established the online share trading outlet, Zerodha, in the year 2010. At present, it is the biggest share trading platform in India for several clients. The share broking charges have come down considerably since the entry of Zerodha into stockbroking.

Zerodha today ranks as India’s Top Online Stocks and Commodities B Rockrage with nearly one million people connected to its Zerodha Kite and Zerodha Coin platforms.

Arvind Tiku is one of the top Youngest Billionaires in India. He is the founder and current Managing Director of AT Capital Group. He was born in India but later moved to Singapore in 2007. Being a medical engineering student, he has always been interested in property, oil and gas, and renewable energy, through which he ran his company.

At the age of 18, he left India to pursue medical engineering in Russia and was employed as a commodities trader before entering the oil and gas business in Kazakhstan. He also took advantage of a stake in London-listed Nostrum Oil & Gas. Tiku has invested in India’s renewable energy projects that are up for sale.