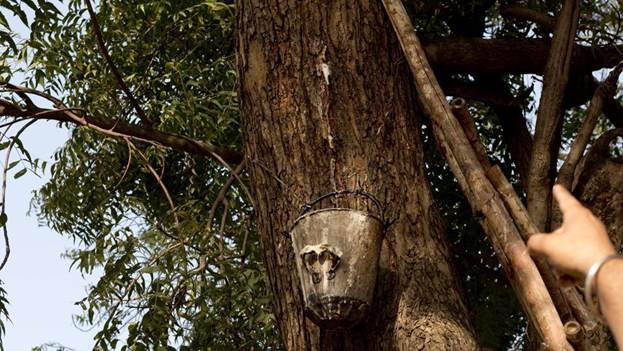 Every college student wants to be the part of Hindu college due to astounding events and facts that keep on happing there.  Much hyped news about Hindu college these days is related to a ‘Neem tree’ which ooze beer. Now proudly student can boast about Hindu college that it has given Delhi University its own bar for boozing! Apart from joke, a tree is found near college rugby stadium bearing liquor i.e. beer.  The tree is oddly one out of fifteen ‘Neem’ trees which are older than 50 years lactating a white liquid from its trunk since four month that get people high. A bucket is hung there to collect every single drop of this precious free beer. Mostly laborers come there with bottles to appreciate this fragmented sap and according to them its taste is somewhat toddy (natural liquor, water, sugar) and bitter and it is intoxicating. According to the gardener, the tree is secreting white liquid from   November 2016 and almost 10 liter is collected every day. People from outside of the campus come to get high and to have another experience of booze.

The tree can be easily located from at least 10 feet away due to alcoholic smell it produces. The tree is gaining a lot of popularity. No doubt, if it became another adda of DUites for boozing. Howbeit, according to experts there is a reason behind the secretion of white liquid. As per them, the white liquid means that the tree is suffering from some disease or bacterial infection. The bacteria inside the cracks of tree are fragmenting the sap hence giving out a liquid that appears to be alcohol. There are chances that it can be harmful hence people should stop consuming it.

There are around 15 neem trees near the rugby stadium towards the back end of the campus, most of which are more than 50 years old.