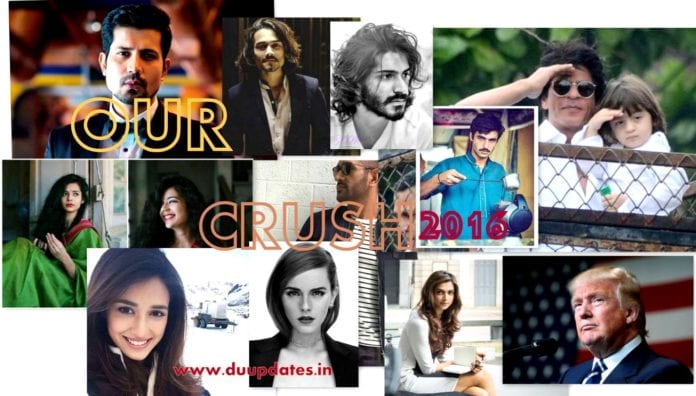 We started admiring her when she appeared in diary milk bubbly advertisement. Then she came on screen with Tiger Shroff but her cute and innocent role in M.S.Dhoni won our heart and she became our favourite. Every guy is in love with her .She is cute , innocent and her smile is damn adorable.The internet went crazy with her pictures and we even saw meme calling her “NATIONAL CRUSH OF 2016”. Although he is married and father of a girl but seriously he is my favourite one. Crushing on someone is just not always about looks but sometimes we adore them because of their work. No doubt , M.S.Dhoni is no less than a celebrity. As we came to know his untold story we fell in more love with him. I don’t think I have to write about her.  Her name is enough. <3 Please don’t tell me that you don’t know him. He is ruling the internet with his web series, “Permanent Roammates”. If you remember he even starred in a television serial but he played the role of a serious and disciplined man.He made his bollywood debut with English Vinglish.But he actually came in limelight and became our most favourite one after starring in Permanent Roammates as Mikesh. This cute girl with curly hairs and charming smiles is stealing heart of many boys. Just not boys even girls look at her as  inspiration. We cannot forget how she gained stardom in one night when she covered the Cups song, by singing the Marathi song, Hi chaal turu turu, link to her video is (https://youtu.be/2d1rnOm9IGQ). She made her debut in bollywood with Katti Batti, in which she played role of Imraan Khan’s sister. She gained popularity when she started working in a web series called Confusing Things Girlfriends Say and currently she is playing the role of Meera Sehgal , a 21 year old girl who comes to Mumbai to fulfill her dreams in the web series Girl In The City. She is on the way to her success. His movie didn’t perform well but you can’t deny the fact that this guy has made place in our hearts. His intense look has charmed us. Hoping there is a lot to come from him. Man with beard is stealing our hearts. From 2001 we have seen her growing up and even, we grew up with her. She just not grew up as an actress but as a social activist too. Waiting for her movie , Beauty And The Beast to get release. If you would ask me to choose between bollywood hotties and cute AbRam , I will surely run to AbRam only.  But I am not that lucky enough. Like his dad only ,AbRam has managed to won our hearts at such a young age. His cute face and adorable smile can melt anyone’s heart. Daddy SRK and son AbRam are giving us some major dad-son relationship goal. Who has not watched BB ki vines? I guess everyone has. This Delhi guy is touching the sky after he started his own youtube channel. He features himself as each and every character in his video. He is     really talented as you can watch in his videos. His hairs and cute smile stole my heart. He is even a musician. The language he uses may offend many but we people are loving him. We can say he is a rising star and there is a lot he can do. His real name is Arshad Khan but he is almost known as Pakistani Chaiwla. His just one picture stole the limelight on social media. He became talk of the town. Although it was the time when there was something serious going on between India and Pakistan, actually when it does not. Arshad’s look and eyes are the reason why girls went crazy. He was even compared to Fawad Khan. After this he actually became a model. See how one picture can change your life. The only person in 2016 who has left everyone behind is Mr.Trump . We just cant stop crushing over his cute face and awesome hairs.

I hope you guys know what sarcasm is.