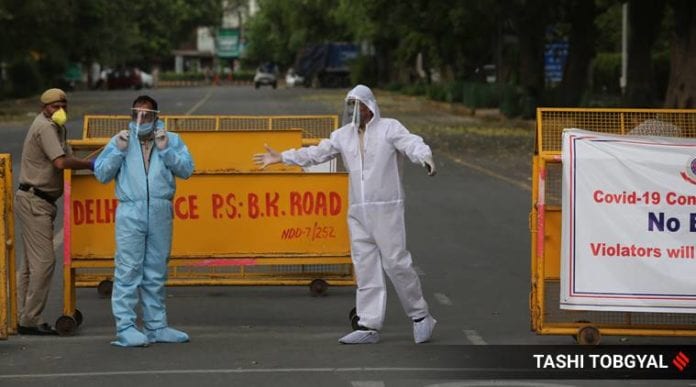 JAHANGIRPURI AND GTB ENCLAVE IS CONTINUOUSLY SEALED FOR 3 MONTHS

The decision was taken when the Union Health Minister urged the center to reduce the restrictions in containment zones and bring down the containment period to 14 days. Areas like Jahangirpuri and GTB enclave was continuously sealed for 3 months. The serological survey in Delhi disclosed that every fourth resident of Delhi has found antibody for coronavirus and that is why the number is expected to go up to 40% in the next survey in August.

THERE SHOULD BE A STRICT SURVEILLANCE AND TESTING MANIFOLDS

The State Health Minister said that now, the containment zones should be released. Moreover, the conditions of different areas should be kept in mind. The present policies should be reviewed so that people may not face many difficulties. Rules should be made according to needs and requirements. According to the Union Health Minister’s order, the surveillance is less than satisfactory. Home isolation guidelines are inadequate. As per the order, states are asked for stricter surveillance and an increase of testing manifolds in the containment zones. To reduce difficulties faced by residents, the ministry stated to reduce the surveillance period if no COVID-19 cases are confirmed in the sealed zones for at least 14 days.

MANY PEOPLE ARE UNDERSTANDING AND FOLLOWING THE NORMS

The local authorities who are in charge of the containment zones said that people are becoming restless staying in a sealed zone for such a long time. Though, many people are understanding the seriousness of the issue and are cooperating with the norms and protocols. On the other hand, there are some who are resisting the norms. There are many people whose offices have been reopened and they would lose their jobs if they are not allowed to go out of the sealed zone. That is why many containment zones are restricted to some limits. Big areas are divided into smaller regions. Due to this, few people are getting restricted from moving and few people are breaking the containment rules.

Poker Sites in India are Trending