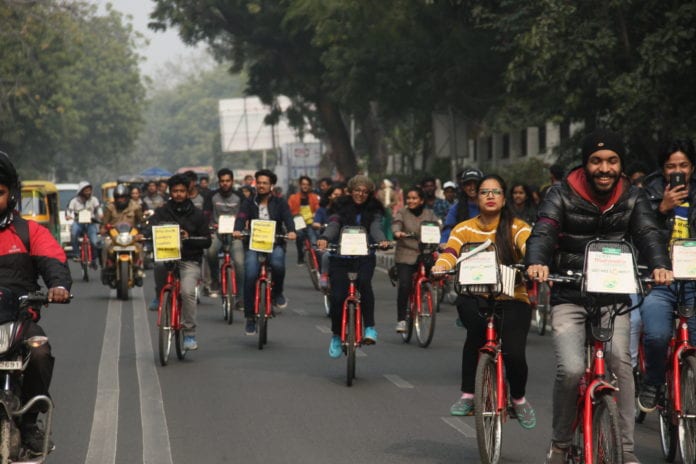 TEDxAryabhattaCollege, on the occasion of “National Girl Child Day” organized a series of events on 23rd-24th of January. On 23rd of January, TEDxAryabhattaCollege along with the CSR Research Foundation (sponsored by ONGC) inaugurated Sanitary Napkin Vending Machines in Motilal Nehru college, Atmaram Sanatan Dharma college and Aryabhatta college. Goonj displayed a photo gallery in college and promoted women health and sanitation through a discussion over menstrual health. They talked about the stigmas attached to menstruation and how it is still considered as a taboo to openly talk about, such a recurring and regular thing which happens to all the women.

Students shared their experiences and explained how indifferent and hostile people are, towards women who are menstruating and how they are treated differently during the time of the month. Students were shown videos and were made aware of the issue.

TEDxAryabhattaCollege in collaboration with Tech Mahindra Foundation organized a cycle rally on 24th January in North Campus. The aim of the event was to promote and spread awareness about women health and sanitation and to maintain basic cleanliness standards in colleges and society. The rally started from the Vishwa Vidyalaya metro station and participants went around the north campus. A great number of participants appeared and served for the cause. People were filled with great enthusiasm. Due to the overwhelming response from the public and participants, the event was a satisfactory success.

Teacher In charges Ms. Pritika Dua, Dr. B.Mangalam and Ms. Shruti Vats appreciated the efforts made by students of the college to promote and make people aware of the issue. It is commendable that TEDxAryabhattaCollege took up such an issue which isn’t usually talked about but is of great significance.

TEDxAryabhattaCollege thanks Goonj, CSR foundation (Supported by ONGC), Tech Mahindra, Roister (Aryabhatta College) and all the participants who appeared and supported for the cause.

Du Updates for the latest Delhi University News and Updates.