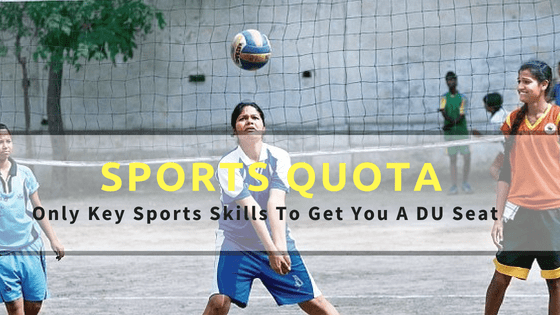 Delhi University offers admission to students excelling not only academically but also to those who are good in sports and extracurricular activities. Each college reserves minimum 5 per cent seats for Sports/ECA quota in all undergraduate courses. But this year admissions in Delhi University through sports quota will see modifications. Students with specific skill sets will only be eligible to apply under this quota.

An official clarified that all the colleges will issue their specific requirements to the University on the basis of which the candidates would be chosen. For example, if the college volleyball’s team needs a ‘lifter’, only those with this skill set after trials will be considered, he explained. No extra student will be considered.

Under the new rule approved by the DU’s admission committee, the colleges would send a list of requirements with the number and position in their team to the university. A member of the sports council said,” This will help colleges streamline their process as they will only request for specific positions and not get extra players.”

The university also specified that in case of a tie between students, the one with the high trials would be considered.

Once a student who played football as a striker had to audition for all the seats offered at DU. After clearing the trials, the student was allotted colleges where football was played. Even there have been incidents when a college that required a striker would get a defender. But with this new rule, the colleges will be at ease as they would get sportsmen as per their requirements said a member of the university’s sports council.

The proposal was sent by the council to the admission committee and was approved. The council member said that more students should apply at DU as they have an advantage of the sports quota. “With the better infrastructure available, they can grow during their years at the university,” the member added. The member continued by saying that the students would have to specify their skills while applying for the trials. Since last year, DU has made admissions easier by giving more weightage for sports trial. “Earlier, the university gave 50% weightage to sports trial and 50% to sports certificates. However, since last year, we have given 60% weightage to the trial and 40% to the certificates,” he further added. On the fact that the students who do not fall into a particular position or sports bracket may miss out on admission, the member said, “It is unlikely that colleges won’t get their required sportsmen, but if that happens, positions can be altered to accommodate more students.”