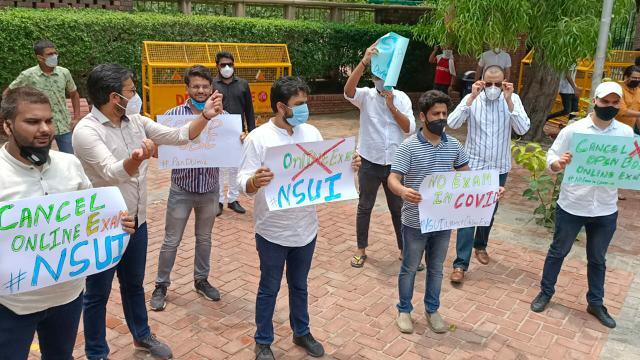 The National Students Union of India on Friday, July 10 initiated the #SpeakUpForStudents social media campaign. The campaign has been started to demand cancellation of examinations and assessments on the basis of the past year’s performances. The second demand raised by NSUI is #NoFeesFor6Months in view of the financial crisis due to COVID-19.

NSUI #SpeakUpForStudents on the very first day got 560k tweets and established top rank on the twitter trends. Students from Delhi University participated in huge numbers in the campaign.

In support of the #SpeakUpForStudents former chairperson of UGC has also requested the UGC to reconsider its advisory. He appealed UGC to protect the interest of students and the integrity of exams by canceling exams and ending uncertainty.

The University Grant Commission on 6th July released its amended guidelines for the conduct of final year exams by September end. Students have taken the objection against UGC’s decision through social media protests.

A student body told that since the last two months NSUI has been running a national campaign to scrap University’s examinations. NSUI has also held meetings with more than 100 Universities. Also, the NSUI members have submitted memorandums go VCs of around 150 universities all around the country. The union has also filed written petitions in various states, held district-wise protests, and have sent messages in various WhatsApp groups of all such universities.

The #SpeakUpForStudents have gained support from all over the country. Due to the pandemic and shut down of college students we do not bake to attend the classes in the past months. Students say that the issues and problems of more than 3 crores students are being neglected by the media channels. Students claim that they are being set on trial against the COVID-19 pandemic.

Rahul Gandhi who first initiated the #SpeakUpForStudents campaign says that it is extremely irrational to conduct final year exams in the mid of COVID-19 pandemic. He asserted that UGC must hear the voices of students. Exams should be canceled and all the students must be promoted on the basis of past years’ performance.

Supriya Shrine a congress spokesperson says India has reached the third position in the list of world’s worst coronavirus infected countries. She emphasizes on why is UGC insisting on examinations. She questions that don’t the precious lives of students matter. While Tarun Gogoi, the ex-chief minister of Assam does not support UGC’s decision to conduct exams. He says such an extreme coronavirus situation it is unadvisable to hold exams for final year students.