Congress Party President Sonia Gandhi demanded OBC reservation in All India Quota of Medical and Dental seats in state educational universities in order to benefit them in NEET exams.

On Friday, Sonia Gandhi wrote a letter to Narendra Modi, asking reservation for OBC candidates in All India Quota of Medical and Dental seats. 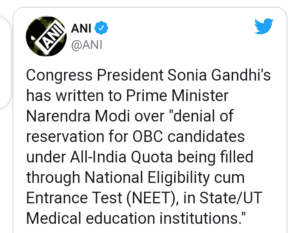 She stated that 15%, 7.5%, and 10% seats are reserved for SC, ST, and Economically Weaker Section candidates respectively under the All-India quota in both Central and state educational institutions. Citing the data assembled by the All India Federation of Other Backward Classes since 2017, she wailed that OBC candidates lost over 11,000 seats in the All-India quota due to non-implementation of OBC reservations in state educational institutions.

Also, Gandhi highlighted that the 93rd Constitutional Amendment envisages special provisions for the improvement of any socially and educationally backward class in admission to any educational institutions other than minority educational institutions. She added that the rejection of the reservation to OBC candidates infringed the very objective of the 93rd Constitutional Amendment. Moreover, the Congress president insisted that the deserving OBC candidates faced a barrier in accessing medical education due to this system.

Breaking the uncertainty over exams, Union HRD Minister Ramesh Pokhriyal on Friday declared the decision to postpone the JEE Main and NEET 2020 examinations. The announcement was made on the basis of the suggestion given by the panel of experts formed by him on Thursday.

National Students Union of India,  expressed its happiness over the rescheduled dates of NEET and JEE Exams.

NSUI cheers the government’s decision of suspending the NEET-JEE examination. From the very start, NSUI has been considerate with their demand for postponing the examination, stated the letter issued by NSUI National President Neeraj Kundan.