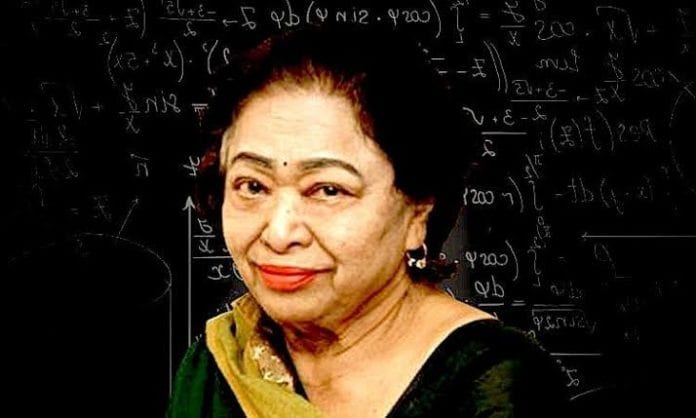 Shakuntala Devi born on 4th December 1929 is an Indian Mathematician who is recognized as the human computer in the world she is not only a mathematician but also an astrologer, mental calculator founder, and writer. She focuses on simplifying the calculations and questions compressions for the students. There is much more to know about Shakuntala Devi Biography including her success and relationships. Let’s know about it all.

Through her marvelous calculation, she has hold a precious place in the Guinness Book of World Records in the 1982 edition. Shakuntala Devi was of 85 years old when she died on 21st April 2013. In 2020, the concerned authorities posthumously gave the certificate of a reward. Moreover, on 18th June 1980, she achieved the world record at Imperial College London.

She was very talented as a child who showcased her arithmetic abilities. She did not get any formal education but was able to showcase her talent at the University of Mysore. Moreover, she was also an astrologer. So, she wrote many books that include novels as well. Apart from novels, she wrote textbooks on maths, puzzles, and astrology. She researched and studied about homosexuals in India.

Depending upon her research and knowledge, she released a book called The World of Homosexuals. It was her first study of Homosexuality in India. She always considered herself a pioneer in this field. In Shakuntala Devi Biography, we will get to know about her life, profession, records, and also about the work she did.

Talking about her early and personal life she was born in Bangalore in a Kannada Brahmin family. Her father was CV Sundararaja Rao. Shakuntala was from a Brahmin family. Belonging from such a family background, everybody forced her father to become a priest in the temple. But he refused to do so and became an artist.

He was a trapeze artist, lion tamer, and tightrope walker. He also worked as a magician in the circus. Shakuntala Devi went to convent school to study but the school authorities expelled her for not paying the fees. But she was so skilled with calculations that she used to find the cube root of the biggest digits.

He observed her daughter’s talent that can memorize numbers without any trick. It was the time when Shakuntala Devi was only three years old. Her father on observing her talent, left the circus. He took her daughter on-road and showcased her ability to calculate at the age of three.

SHAKUNTALA DEVI DID NOT GET FORMAL EDUCATION

She did all the calculations without any formal education. The world accepted her talent and at the age of six, she displayed her arithmetic abilities at the University of Mysore. After performing her talent at the University of Mysore, she went to other countries as well. She went on a tour of Europe in 1950 to show her arithmetic calculations in 1976. She was in the New York City.

Moving further towards 1988 she was in the United States of America. In the US, Arthur Jensen studied her abilities of mathematic calculations. Arthur Jensen is a professor of educational psychology at the University of California, Berkeley. While checking her calculations and talent, Arthur Jensen gave her to perform some tasks that included calculating some large numbers. Some of the problems included that Devi had to solve the cube root of 61629875 and the 7th root of 170859375. The most amazing part of solving these questions and answering them was that Devi solved the questions and provided the solutions before Jensen could even copy the questions down in the notebook. Amazed with Devi’s performance, Jensen published his findings and studies in the academic Journal named intelligence in 1990.

Talking about books in Shakuntala Devi Biography, she wrote “The Joy of Numbers.” In that book, she mentioned her art of mental calculations. She described herself and her ability to complete numbers in such a big calculus in minutes. Shakuntala Devi also worked on the mantle computer and wrote some books.

Shakuntala Devi wrote a book called “The World of Homosexuals”. It was the first case when she studied homosexuality in India. She was a homosexual and was criticized by many. Shakuntala Devi also wrote her documentary “For Straights Only” which proved that her interest in this topic had a different reason. She was married to a homosexual man and was eager to understand the concept of homosexuality. The book which she wrote included interviews with two young Indian homosexual men.

One was the male couple in Canada looking after a legal marriage and the other one was a priest who himself explained his views on homosexuality. There was also a review of the literature of it.

WHEN DID SHAKUNTALA DEVI MARRY?

At that time, talking about personal life in Shakuntala Devi biography, she returned to India in the mid-1960s and was married to Paritosh Banerjee. Paritosh Banerjee was an Indian administrative service, IAS officer from Kolkata. However, their marriage could not work and they filed a divorce in 1979.

Shakuntala Devi had an interview with BBC. The director of the same is Leslie Mitchell. She got a very difficult question to solve. Although she solved the question in just a few seconds but the host declared her answer as incorrect. The answer was not matching with the calculator answer. After some time, he came to know that Shakuntala Devi gave the right answer and she got the title of the “Human-Computer”.

Shakuntala chooses to be with Anupama and also supports her in her business idea. The bond between them gradually grows. Later, Anupama decides to marry Ajay Abhaya Kumar who is a businessman. She was against former Prime Minister Indira Gandhi on a topic that she wanted to defend the people of Medak as the former prime minister was fooling them.

HOW AND WHEN SHAKUNTALA DEVI DIED?

She also wrote some short stories and cases related to the murder along with which she had a keen interest in music. In 2013 April due to her respiratory problem, she was admitted to a hospital in Bangalore and suffered from kidney and heart complications. After 2 weeks, she died in the hospital on 21st April 2013 when she was 85 years old.

WHO IS ANUPAMA BANERJEE IN SHAKUNTALA DEVI BIOGRAPHY?

She also has a daughter Anupama Banerjee who is married to Ajay Abhaya Kumar. Anupama Banerjee has now two daughters and lives in London. On 4th November 2013 Google doodle honored Shakuntala Devi by what would have been her happy 84th birthday. Inspired by the life story of Shakuntala Devi and her achievements, Sony Pictures network production produced a movie on her. The stars of the movie were Vidya Balan who did the role of Shakuntala Devi. Moreover, Sanya Malhotra, Amit Sadh, and Jisshu Sengupta were featured in the movie. The movie was streamed worldwide on 31st July 2020 on Amazon Prime Video.

SHAKUNTALA DEVI AS A MOVIE

Vidya Balan was the lead actress in the movie Shakuntala Devi. While performing one of the lead roles in Shakuntala Devi, she reviewed the movie. She said that the writer and director of the movie is Newman and this movie is based upon the incident of her character’s life. and the Co-writer nannycam attorney started a conversation with the daughter.

Anupama Bannerjee and created a movie that is inspired by true events. But they did not showcase the movie using a word documentary or a biography because these are some of the cases of the character’s life that Anupama Banerjee has herself seen through her eyes.

The movies started screening her childhood in  Bengaluru in 1930 where her father discovers her talent for solving complex automatical problems without any formal education. Her father used to do math shows with her and entertain people. Shakuntala continued to do these types of shows and earn for her family.

Shakuntala blames her father for not letting her growing up as a normal child and also blames her mother for not standing up to him during her sister’s death. In 1954, she leaves for London to entertain others and she comes to know that her boyfriend Dheeraj was pretending to be in love with her.

She lives with Tarabai in her home with three other Indian men and manages is to impress Javier. Javier is a Spanish mathematician. Shakuntala showcases her skills to Javier and he helps Shakuntala to grow her personality as well as speaking skills. They both come into a relationship with each other.

As time passes by, Shakuntala gets the name of the human-computer when she proves that a computer is wrong in a TV show. She becomes a global celebrity. Meanwhile, Javier ends his relationship with her because he needs to return to Spain.

In 1968, Shakuntala meets Paritosh Banerjee and falls in love with him. The couple ultimately gets married and in 1970 Shakuntala gives birth to Anupama. She continues to resume her career leaving Anupama with Paritosh and amazes people with her skills. The couple faces some personal issues and decides to file a divorce.

Shakuntala gets her name registered in the Guinness Book of records. But she is worried that she is not a caring mother so she decides to take her daughter along with her on the journey. Anupama feels that Shakuntala is ignoring her. She is at a breaking point where she asked her mother to choose between her career and her.

Shakuntala chooses to be with Anupama and also supports her in her business idea. The bond between them gradually grows. Later, Anupama decides to marry Ajay Abhaya Kumar who is a businessman.

Anupama blames her mother for holding her back always. So, Shakuntala unwilling to let go of her daughter decides to shut down her daughter’s business. Anupama marries Ajay and loses contact with her mother. Her daughter is shocked to know that Anupama has used her power of attorney to shut down her business but she passed the payment of the capital gains tax.

Ajay decided to take legal action against Shakuntala and travels to London. Lastly, Shakuntala gives the profit of properties to her daughter asks for forgiveness and the movie ends here.

Shakuntala Devi biography is tied up with so complicated yet crucial relationships. She got strong support from her father. Her father laid down his career and always supported her daughter to grow up and light the world. But, Shakuntala complained how he did not let be to enjoy her childhood and be a normal child.

Shakuntala was so young when she started her tour in different nations. All the popular and talented professors appreciated her talent for solving such typical arithmetic problems. She even got the title of the ‘human computer’ by BBC.

Shakuntala and her daughter shared a complicated yet beautiful bond. The movie on Shakuntala Devi Biography is based on a true incident. Observing a mother-daughter relationship from that movie, Shakuntala was a bit focused on her career rather than focusing on her daughter. But she loved her daughter so much that she apologized for her deeds in the end.