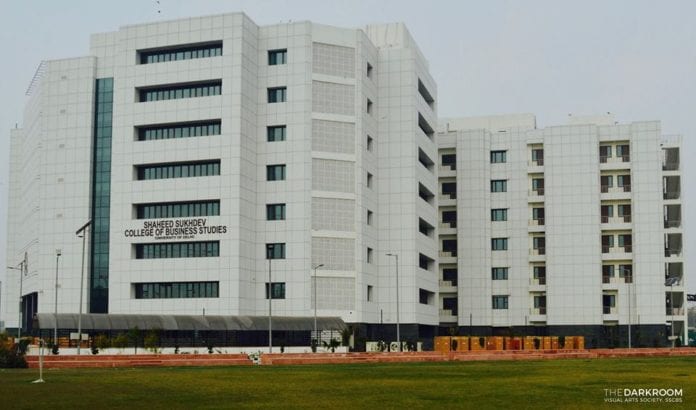 Shaheed Sukhdev College of Business Studies (CBS) is a premier undergraduate management college under the aegis of the University of Delhi (DU) offering Bachelor of Management Studies (BMS), BBA (Financial Investment Analysis) and B. Sc. (H) Computer Science. The admission in BMS and BBA (FIA) is through a highly competitive Joint Admission Test (DU JAT) followed by rounds of Group Discussion and Personal Interview with an intake ratio of 1:140. The Placement Season 2017-18 saw the participation of 68 companies making 155 offers and counting. KPMG and Bain Capability Centre were the largest recruiters with 20 and 11 offers respectively. The average package amounted to INR 6.4 LPA while the highest package offered was INR 17 LPA. The season saw 3 companies from the league of the Big 4 namely EY, KPMG and Deloitte. Other reputed names such as The Boston Consulting Group, AT Kearney, DE Shaw, McKinsey Knowledge Centre, Verity, Duff & Phelps, United Airlines and Knight Frank also
became a part of the season.
CBS has yet again seen a multitude of prestigious companies expressing their faith in the
students this year, that helped us in achieving a placement ratio of more than 83%, which is amongst the highest in the Delhi University. Companies from more than 15 different sectors offered a diverse mix of profiles that included business analyst, strategic consulting associate, marketing executive, equity and other research-oriented positions.
In addition to this, the Placement Cell also conducted an internship season to help students
acquire internships and gain the necessary experience and skills. The college saw participation of companies such as SBI, Knight Frank, CBRE, Jasper Collins and Willis Towers Watson for recruitment of interns. Industry Training workshops were conducted in association with various organizations as part of Training & Development activities of the Placement Cell. We, at CBS, aim to strengthen corporate relations of the college with the companies. We successfully organized the zonal round of KPMG International Case Competition 2017 in the college premises which saw participation from various colleges. The team from CBS won the north zone regional championship and was the only undergraduate team to participate in the Nationals.

Here is what recruiters had to say about the placement process:
DE Shaw: “We conducted an off campus hiring event and the placement team CBS was very professional and I expect the new team to maintain the high standards!”
“I have interacted extensively with the students during the interviews and I have a high opinion of them. They were knowledgeable about the firm and the role and their demeanor was commendable. I believe this has a lot to do with the stringent admissions process along with the faculty and the senior students passing on their experience with the new batches.” Bain Capability Centre: “The placement process was very smooth. It was easy to coordinate with the college as they accommodated our calendar and were flexible regarding the dates.
Further, they were very hospitable during the PPT and Case Study Workshop.”
If you wish to hire from CBS and be a part of our Placement Season 2018-19, write to us at
cbsplacementcell@sscbsdu.ac.in or https://www.facebook.com/cdcsscbs/