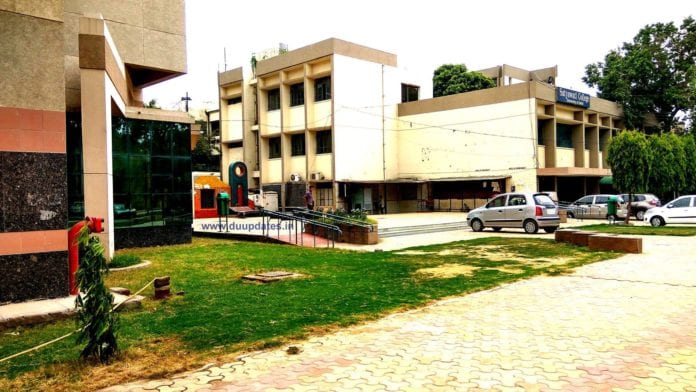 The governing body of Satyawati College on Thursday sent its evening college principal Dr Vijay Shankar Mishra on a 15-day leave over allegations of administrative irregularities.

The governing body also constituted a fact-finding committee to look into allegations over roster, appointment and administrative irregularities.

“In order to ensure a free and fair inquiry, the governing body decided that Dr Mishra should proceed forthwith on leave and avoid visiting the college premises during the pendency of inquiry against him,” the governing body, in a statement, said.

“I got to know in the morning that my office was sealed and bouncers were placed outside. I called the police and later, the seal was broken in their presence,” Mishra said.

Governing body chairman Pankaj Gaur said they had received multiple complaints about Mishra not following the reservation roster. “After the staff members employed under SC/ST quota retired, the circular announcing vacant positions would not specify that these were reserved posts,” he said.

“I challenge them to prove that even one vacancy was against the roster,” Mishra countered, adding that the roster implementation cannot be done without the university’s approval.

A section of students and staff members protested against the decision taken by the governing body, which locked Mishra’s room and called in security personnel on campus. “We did not see any sense in locking up the principal’s room. However, the matter was later resolved amicably,” Himanshu Singh, a teacher at Satyawati College, said.

Gaur, however, alleged that Mishra had brought along 40-50 “goons” with him to the campus on Thursday and they allegedly roughed up the non-teaching staff and others. He said the police arrived on the campus to diffuse the situation.

Mishra denied the allegations saying DU teachers’ association members, including its president, were there on the campus on Thursday along with DU student union president Shakti Singh, and executive council members.

In December last year, deputy chief minister and education minister Manish Sisodia had asked Delhi University V-C Yogesh Tyagi to intervene and take action against Mishra for calling an emergency meeting of the governing body without the chairman’s approval. In a letter to Tyagi, Sisodia asked for appropriate action to be taken against Mishra for violating the university ordinance and the EC resolution.