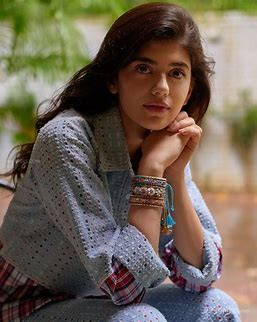 Sanjana Sanghi, the upcoming star of Bollywood has already stepped into her world of success through the film ‘Dil Bechara.’ Let’s discuss the life of the rising star of the Entertainment Industry in Sanjana Sanghi Biography.

Talking about her personal life, she is put up in Delhi and belongs to a family where his father is an entrepreneur, and mother is a homemaker. She also has a brother Sumer Sanghi who works for Google in the US.

Sanjana was born on September 2, 1996, and is 24 years old now. She was a bright student while completing her education. She completed her schooling from Modern School, Delhi. Sanjana is a graduate of Journalism and Mass Communication from Lady Shri Ram College, University of Delhi. From her childhood, Sanjana always has a keen interest in participating in different activities. She was not only intelligent and a bright student, but also enthusiastic to ace other competitions as well.

Talking about academic achievements in Sanjana Sanghi Biography, Sanjana has also received an Appreciation Letter from the Minister of Human Resource, Smriti Irani. Moreover, she also won many gold medals at Delhi University. After completing her schooling and graduation, Sanjana began her struggle to get into the Bollywood Industry. Her dream was to become a Bollywood actress. So, her family even reached Bollywood.

Sanjana is extremely adorable since her childhood. She took her first step into the Bollywood industry in 2011. At the age of 14, Sanjana got a role in the movie Rockstar. She performed as Nargis Fakhri’s sister.

Rockstar was a blockbuster movie starring Ranbir Kapoor and Nargis Fakhri. The movie has amazing songs and tracks which still count on the top. The movie is directed by Imtiaz Ali. After Sanjana performed in Rockstar, she came into the limelight.

After Rockstar, Sanjana worked in the movie Hindi Medium directed by Saket Chaudhary. Irfan Khan played his Debut In the movie. Although Sanjana did not get a major role in the movie, but she won everyone’s heart with the role. The movie hit several records not only in India but also in China. The movie was a drama-comedy and was based on the Education and Schooling system.

MODELING AS A CAREER OPTION IN SANJANA SANGHI BIOGRAPHY

Apart from her career in acting, Sanjana started getting offers in modeling as well. She worked for famous brands like Coca-cola, Tanishq, Myntra, Cadbury, Aircel, and many more. Although Sanjana stepped into the Bollywood industry but did not get any major role until Dil Bechara.

Sanjana finally got to play the role of the main character of the film Dil Bechara. Mukesh Chhabra directed the movie and it is adapted from the novel ‘The Fault in our Stars. The movie starred Sushant Singh Rajput and Sanjana Sanghi as two hopeless romantic lovers.

Sanjana and Sushant played the role of cancer patients, Kizie and Manny in the movie. The movie was released last year. It was supposed to be released earlier. Due to the coronavirus pandemic, the movie was not released.

On the other hand, the famous Bollywood star of the movie Sushant Singh Rajput attempted suicide on 14th June 2020. So, the movie was released digitally on Disney+ HotStar on 24th July 2020. It was Sushant’s last movie.

The country was shocked by Sushant’s suicide case. He was always loved by his fans. Unfortunately, nobody could ever know the release of his suicide attempt. Everybody was eager to watch Sushant’s movie and so the movie broke several records. It was a major blockbuster hit. It was the last film of Sushant Singh Rajput but the first movie in which Sanjana got a lead role. The story of Kizie and Manny is still popular among the audience.

A few months ago, a student of LSR committed suicide at her residence because of poor financial conditions. At that time, Sanjana started a relief fund that would help students who need financial assistance so that they could attend online classes.

Given the situation, Sanjana Sanghi posted about the problem of financial aid faced by the students. She asked everyone to contribute and wrote in her post ‘we’d be forever grateful if you could help out by doing the most tin possible bit. Losing Aishwarya has been a very tough ordeal.’

Sanjana Sanghi was a brilliant student not only in school but also in college. During her college days before she marked her debut in the entertainment industry, she also worked as an intern. Sanjana Sanghi was also a part of some college societies as well. She was the senior coordinator of the Placement Cell of Lady Shriram College.

Sanjana has also represented India at many international public speaking events as she was a public speaker. She got her apprentice with BBC and was also a core member at the National Service Scheme at LSR.

Sanjana also performed her best while serving society. She had active participation in social services and was fond of teaching underprivileged children. She was also a trained Kathak dancer and also a part of many advertising and commercial brands like Coca Cola, Cadbury, Myntra, and many more. Her net worth is 1,000,000 and her average movie remuneration is 20 million. She loves traveling and hanging out with friends.

On the other hand, when she was shooting for ‘Dil Bechara’ with Sushant Singh Rajput, there was a controversy which states that Sushant Singh Rajput was trying to harass her sexually but she denied all the accusations and called it fake. To keep her physical appearance and body stable and be in a good shape, she performs yoga every day.

Sanjana is performing her best on the OTT platforms. Her movie ‘Dil Bechara’, that was released on Disney HotStar was her first debut film and it is one of the best commercially hit film of the Bollywood industry. Sanjana has been put up in Delhi and her Zodiac sign is Virgo. While appearing for an interview, Sanjana said that her favorite singers are Kishore Kumar, Mohit Chauhan, and Atif Aslam. She loves pancakes while her favorite color is blue and black. Her favorite actress is Madhuri Dixit and Actor is Ranbir Kapoor, Naseeruddin Shah, Hrithik Roshan, and John Abraham. Sanjana Sanghi took the first step into the entertainment industry when she was 14 years of age with a hit Bollywood film ‘Rockstar’. She worked with the stars Ranbir Kapoor and Nargis Fakhri.

IMDb is referred to as one of the best sources for movies, TV shows, and celebrity content. It has revealed the top ten stars of Bollywood films and web series. This was the first time IMDb observed the stars featured in web series or film who had a breakthrough career.

Based on the reviews of professional critics and the performance of those movies on the box office, IMDb released a list that marks the stars based on their ranks. So, it ranks the stars who worked consistently and whose movies have commercially earned well. In the IMDb ranking,

Sanjana Sanghi got the first rank for her outstanding performance in ‘Dil Bechara’. She performed her debut as Kizzie Basu in a movie which is the Hindi adaptation of the Hollywood novel ‘a fault in our stars. The movie was loved not only in India but globally. The actress’s IMDb rating is 7.9 because of the attention she managed to grab from the audience through her remarking performance. Moreover, the movie was the last movie of Sushant Singh Rajput which was another reason to gain attention.

Isha Taliban and Harshita Gaur stood on the second and third rank respectively of the IMDb rank list. They performed their best role in the series ‘Mirzapur’. Some of the other actors and actresses that received the highest responses through the web series ‘Pataal Lok’ ARE Jaideep Alawat, Niharika Lara Dutt, and Swastika Mukherjee. Shreya Dhanwanthari was also a part of The Scam 1992. She too managed to be in the top 10 ranks of the IMDb rank list.

THE RISING STAR OF THE BOLLYWOOD INDUSTRY

This is just the beginning. The world knows Sanjana Sanghi for Dil Bechara and her outstanding performance. Sanjana would surely be one of the best actresses across the world where people will always remember her as their inspiration.