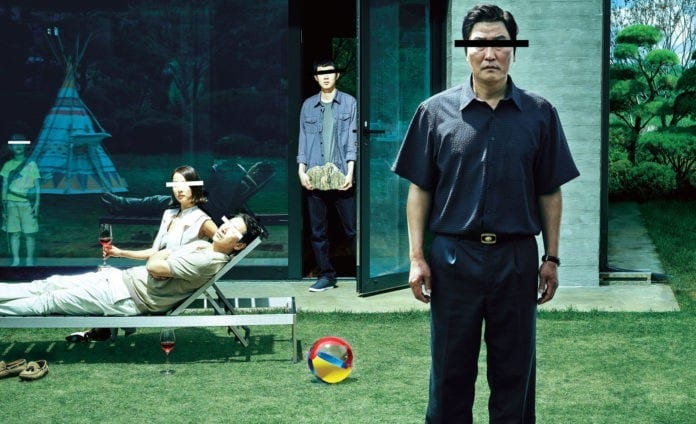 The movie when screened at Cannes’ Grand Theatre Lumiere, received an eight-minute-long clapping with the audience standing well after the lights went up. The film took the prestigious Palme d’Or Award that night.

The movie follows the story of the Kim family, a four members poor family who earn their livelihood by doing odd jobs like folding pizza boxes. One day, the son gets a job as a replacement tuition teacher for the daughter of the wealthy Park family.

The Kim family now schemes to find employment in the wealthy family by infiltrating their household and posing as unrelated, highly qualified individuals. What unfolds later is a teeth-gritting, nail-biting thriller which keeps the audience on the edge of their seat while showing what real poverty looks like.

There are many reasons as to why Parasite must be in your list of movies to watch.

The movie is socially relevant all over the world. The poverty of the Kim family shown in parasite is not something that will be contextual only to the Korean audience or only to the Indian audience.

Poverty is an issue that has plagued the entire world and, therefore, the movie has a universal appeal to it. People all over the world will be able to relate to some part of it on some level or the other.

Initially, when the movie begins, it will seem like every other movie which is in the form of a parable with a moral at the end. But as the story unfolds, the audience realizes that the movie is not only a commentary on social class but many things at its heart. It discusses the unity of a family. The movie discusses the symbiotic relationship between the two families, a struggle for dominance of power, and the vicious cycle of poverty which is ever continuous.

THE MOVIE IS PURE ART

The set of the Park family’s magnificent house is jaw-dropping for many people and has set goals for audiences across the world. The Architectural Digest published an interview with Director Bong back on October 31, 2019. The translator Sharon Choi has enchanted everyone with her finesse at translation. The translation was an important aspect of this movie as it is originally made in Korean. All in all, the plot, the cinematography, the direction, the visuals, all of it exudes sheer cinematic artistry making it an essential watch for all.

THE MOVIE IS FUNNY IN A SAD WAY

EVERY SCENE IS PRECISELY SHOT

The director and the cinematographer have shot every scene with detailed precision. A lot of details have been kept in mind while shooting the movie to make every scene a holistic experience for the audience. The movie is a wholesome experience visually.

At its heart, the movie is a biting social satire about the yawning economic inequality which is seen through the symbiotic relationship between a destitute South Korean family, the Kims, and a wealthy family, the Parks. The shifting of power between the Kims and the Parks gets unexpected after some time and the audiences are left with nothing but speculations about the ending.

The ending of the movie is something that is least expected by the audience and the movie unfolds in a whirlwind towards the end. The audiences are not left with enough time to think about the possibilities as the actions start taking place so fast whilst immersing them into the movie completely. It can also be said that the movie makes people take leave of their senses.

The parasite’s creator described it as “a comedy without clowns, a tragedy without villains.”

Parasite also discusses the mindset of those people who are at the two extreme ends of the socioeconomic spectrum. Money tends to buy people out of their social contract- their need to behave in a certain way. Poverty imposes even more rules, regulations, limitations, and boundaries that become suffocating if gone unchecked.

The title of the movie is also ambiguous as to who is a parasite on whom. The Park family cannot function without house helps and the Kim family is unable to sustain their expenses without any proper employment.

The use of imagery throughout the movie creates an atmosphere where the audience can relate to the characters without the characters having to speak dialogues. The marvelous acting of the actors makes it a worth-watching movie.

I saw this movie a week ago, and till now I am re-evaluating my life. The movie makes you sit back and think about your entire life. It shows you the real meaning of life and what poverty does to people. How people change when they have money!

This movie is already considered a classic by many people because of its thought-provoking plot and the flawless acting of its cast who have managed to hit every note and harmonic resonance of the multinational script. The movie manages to get under your skin and eat away at your cinematic soul.

31 BOOK TO READ MUST IN A LIFETIME: NOT TO BE MISSED