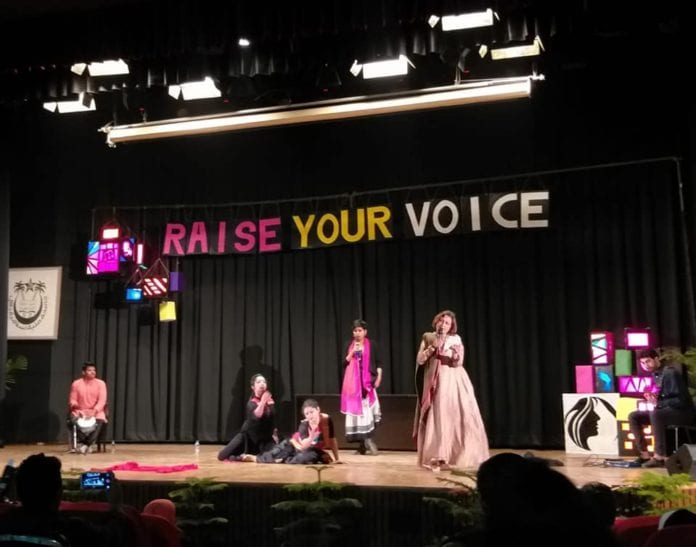 Your Voice in association with the PRO office, Jamia Millia Islamia (JMI) organized a women’s literary festival “Raise Your Voice”at Delhi’s Jamia Millia Islamia. The one day festival started with an inaugural ceremony followed by a panel discussion on “the role of poetry and literature in women’s emancipation” with Arfa Khannum Shervani, Anusha Rizvi, Aditi Maheshwari, Dr. Meher Fatima as the panelists and Garima Dutt as the moderator. Notable musician Vidya Shah was the guest of honour and Mr. A.P. Siddiqui (IPS), Registrar, Jamia Millia Islamia was the chief guest for the occasion. Another event “Kalaam-E-Khawateen”, a poetry event by women poets including Gayethri Mehta, Rupam and Tehmeena got overwhelming response from the audience.  Student Social Entrepreneur Ishhita Singh and Para-Shooting World Silver medalist Pooja Aggarwal inspired the audience by sharing their inspirational stories.

It was the first of its kind and was attended by around ten thousand people.  It was an attempt to mark the upcoming International Women’s Day. The purpose of this one day festival was to celebrate extraordinary acts of courage, determination and achievements of women. This fest a mix of culture, inspiring stories, drama, poetry and Sufi singing. An open mic was also organised for women to come and share their journeys and experiences through slam poetry. Food stalls with mouth-watering delicacies  and handicraft stalls became a  major attraction of the event.

RJ Sayema’s session on “Manto Ki Kahani” wooed the hearts of the audience while a stage play led by the Shilpi Marwaha’s Sukhmanch moved the audience to tears. The day ended with an energetic  Sufi evening with the coke studio singer Dhruv Sangari.