On Sunday, the National Student Union of India affiliated to Congress started a hashtag on Twitter which secured a place in the trending hashtags on social media platform Twitter. “PromoteStudentsSaveFuture” is the hashtag that is gaining popularity on Twitter. The hashtag has been made to support the causes due to which online examinations can become a problem and turn unfair to the students. While addressing the difficulties considering the online examinations, the students are promoting the hashtag to highlight the common agenda. 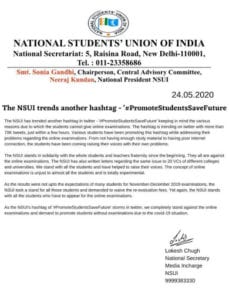 The hashtag has become popular among the students with more than 90,000 impressions. The students of Delhi University who reside in different parts of the country are putting forward all their problems ranging from lack of material and books to slow internet connection with the hashtag.

A student group tweeted while raising a question that in our country where electricity problems arise even while taking online classes, will it be fair for the students who reside in rural areas to attend online classes and sit for online exams with improper electricity supply.

While a student in support of NSUI tweeted that from the outset, NSUI stands in solidarity with the educators and understanding, and even today NSUI supports teachers and students and is all against online exams.

The tweet further stated that 20 vice-chancellors of different colleges and universities have been sent letters written by NSUI. The statement added that the concept of online exams is discriminatory to almost all the students and is completely empirical.

Previously, the national higher regulator UGC after considering the recommendations from an expert committee said that the exams for final year students can be taken in the month of July and the intermediary batches can be promoted on the basis of internal assessment and past performances of the previous semester. The UGC further added if the situation gets stable the exams can be held in the month of July.

Considering the UGC’s proposals which stated that the universities may acquire innovative and productive modes to conduct examinations by shrinking the exam timings from 3hours to 2hours or may conduct examinations in the online or offline procedure. After the notification by UGC, the Delhi University considered the option of conducting exams in online mode which is being opposed by both, the university staff as well as the students.

Delhi University later released a notice stating that the open book exams are not really online exams and will require minimal internet for the submission of answers.

Lately on 21 May 2020, NSUI issued a statement demanding Delhi University administration to take stringent actions against the disparities in released results.

The notification stated that the NSUI stands in solidarity with students who are disappointed with the shocking results affecting their CGPA.

As per the notification, the released results have marked various discrepancies and may affect the future of students. Results of students of BA English (Hons) and BA Economics (Hons) have encountered mass failures whereas students from several other courses have been marked absent in the released results. Even the teachers have agreed that something went wrong with the University’s results. The link for evaluation has been provided but the evaluation fee for a subject is Rs. 1,000 which is likely to cause financial stress to the students. 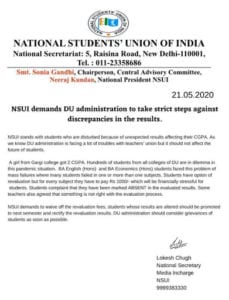 The statement further demands that the grievances of students should be resolved quickly and the evaluation fee should be waived off.