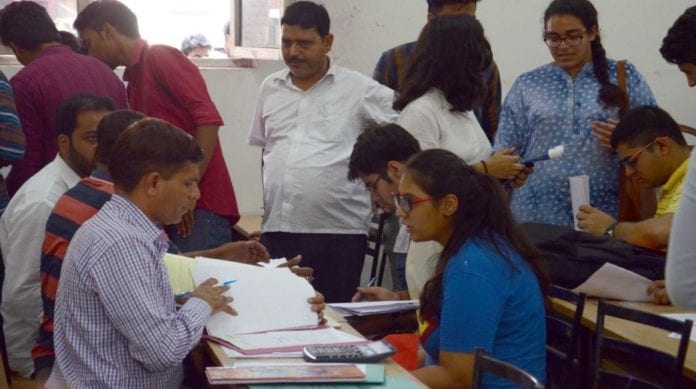 Delhi University’s affiliated colleges might release their cutoff lists by the first week of October 2020. The University of Delhi is waiting for the results of competitive exams including NEET (UG) and JEE Mains, which will now be declared in September.

However, there have been demands and requests from the nationwide parents association who are writing letters to the ministry for further postponement of exams.

The officials say that if the exams are postponed further, then Delhi University might not be able to postpone its entrance exams any further.

However, the University of Delhi is not delaying its entrance test by being afraid of higher cutoffs. The officials of DU says that if the JEE and NEET exams are further postponed and if aspirants seeking admission from these exams get enrolled in DU, the Delhi University will have to suffer an abnormal year where students might withdraw their admissions from science courses after the declaration of JEE and NEET results.

This year there is not one but many factors that may lead to higher cutoffs at Delhi University. The first and foremost factor being the high percentage of CBSE students scoring 90 and above percentage in their +2 exams this year.

Most colleges under DU feels that a rise in the number of students scoring more than 90 percent and above could result in high cutoffs.

At present over 3,28,000 students have registered for UG admissions at Delhi University. The University has received 40,000 more applications than that received last year.

The rise in cutoffs may curtail the success rate further, as the University of Delhi has only 70,000 seats altogether in its colleges.

Dr. Bijayalaxmi Nanda, Principal of Miranda House said that this year it is going to get more difficult to get admission to some of the too ranked precious colleges of the University of Delhi.

NIFT ADMISSION IS ABOUT TO END ON 21 JANUARY | REGISTER...