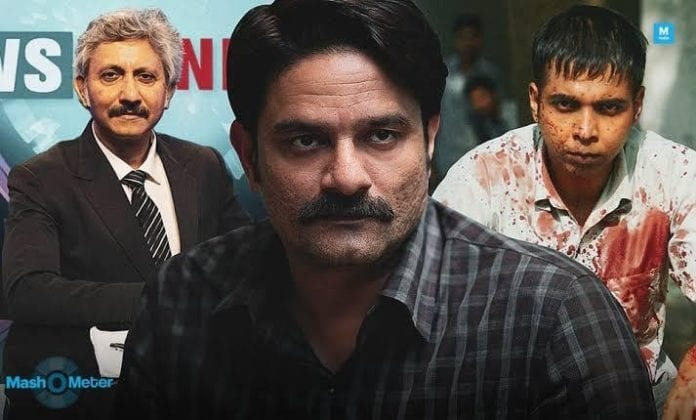 The intricate plot was written by Sudip Sharma with Delhi being captured in its true essence, the writer takes us to the badlands of Chitrakoot in Uttar Pradesh as well as the badlands of life. The story is humane as it captures human emotions and does not present its characters as black or white, but grey. All the characters have some flaw but also have something good about them.

Paatal Lok will keep you hooked with its interesting, fast-paced storyline which does not sugarcoat the reality of anything- the police stations, media, politics. The high use of profanity makes it appropriate only for 18 years and above to watch but it is a must-watch if you love seeing rural India in its puritan form.

The story is about a police officer of Outer Jamuna Paar, Hathi Ram Chaudhary, who has led a very uneventful life till now but is itching to investigate some high profile cases in order to secure a promotion. When a high-profile attempt to murder the case of a famous journalist, Sanjeev Mehra,  comes under him he gets his hopes high that he can get promotion and be a hero in the eyes of his rebellious son. But as he sets out on the mission of finding the motive behind the planned murder of the prominent journalist, he finds that everything is a facade, a mirage of lies and when the mystery of the murder comes out, it comes as a high shock because no one could have anticipated it.

There are four people involved in the killing, out of which the past stories of Hathoda Tyagi and Tope Singh are filled with gore and blood.

To find out about the origin of the crime and at whose behest did the four set out to murder, shocking truths about the rural life of Uttar Pradesh comes out. Some of the most powerful parts of Paatal Lok are set in Punjab and Chitrakoot. Chitrakoot is an ancient town that gets its reputation from being the place Lord Ram made a stopover on his way to Lanka.

Chitrakoot has a rustic charm to it. In the beginning, the place does not offer any exciting proposition, but upon much persuasion, the place starts peeling off its secrets like a rotten onion. The secrets are cruel, intense, and difficult to digest.

There are many social issues addressed in the series which are generally less talked about. The first being the corporatization of the media industry. The media industry has been shown in its true colors where the journalists exercise extreme sophistication but are hollow at their hearts.

Caste politics has also been addressed and the discrimination associated with the basis of caste and religion. The thirst for power has also been commented on along with the tremendous corruption in politics.

The generally less-addressed issues such as anxiety, LGBTQ, dog love, all this have been given proper attention to. Paatal Lok is all-encompassing. It has everything in it which exists in rural India.

The areas of Delhi are shown in their true essence, be it the Nizamuddin station area or the Outer Jamuna Paar area. Even the badlands in Uttar Pradesh has been fully covered. The series also perfectly captures the wildness of the capital and the possibilities in the city.

There are parallels drawn everywhere in the story- between the English speaking sophisticated journalists and the foul-mouthed cops.

The character of craggy-faced Ahlawat had developed holistically over the nine episodes. In the beginning, he has issues with his a rebellious son with a history of violence with his father, his unsuccessful professional life, but as the story unfolds we get to see him developing.

There are many characters in the series and each of their stories has been told about in detail. It gets tiring after one point. But the casting is on point with each actor doing his/her job efficiently.

The CBI’s intervention in the investigation and their findings point out the ease with which everything in the country which is inexplicable, can be explained to the public by using the means of cross-border terrorism. It also points out how innocent people are framed as terrorists and shot in an encounter to gain promotion.

Paatal Lok’s makers have structured the show as a helicopter ride. At first, you are on the ground with your vision being narrow but then you are in the air where you can see the larger, clearer picture.

In the climax, Hathi Ram Chaudhary realizes his true self. The makers have not discarded the possible antagonists of the show on the basis of their past actions. Hathoda Tyagi is not completely shunned away by the makers for his gruesome killing, he is also given a human touch by adding the element of dog lovers in his character.

Avinash Arun and Prosit Roy’s brilliant cinematography makes it a terrific and terrifying show. Paatal Lok will keep you on the edge of your seat for its beautifully crafted mystery and will make you ask for more. Its brilliant portrayal of the Indian “system” is commendable. The character of Hathi Ram Chaudhary is specifically unique because he was supposed to be an ordinary policeman carrying out ordinary duties but when he gets the chance to bring out the extraordinary in him, he does not miss the opportunity. His character is a gentle reminder to everyone that when the situation demands, a hero can come out of everyone. It is a must-watch series for crime thriller lovers.

Also read And binge-watch: PANCHAYAT ON AMAZON PRIME: AN ABSOLUTE TREAT TO WATCH!