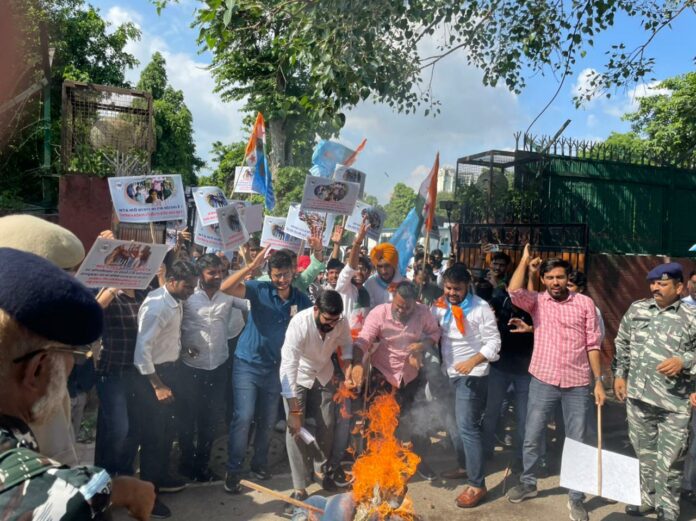 NSUI protest on CUCET: On 17 August, the CUCET exam got cancelled due to poor infrastructure of NTA. As a result, on 18 August, the National Students Union of India (NSUI) protested over the cancellation of the new entrance exam

Today, NSUI, the student wing of the Indian National Congress (INC) protested outside the Shastri Bhavan and put forward their issue. Moreover, they burnt the effigy of the HRD Mini Dharmendra Pradhan and demanded the resignation of HRD.

Earlier, NSUI protested for the same concern on 8 August 2022 outside the arts faculty, DU North campus. They demanded that the responsibility for the CUCET exam should be given to another agency. Further, Kunal Sherawat, NSUI Delhi State president stated that NTA is responsible for conducting the CUCET exam, which had been cancelled recently. NTA has no proper infrastructure for conducting a newly introduced examination.

According to our source, during the protest he said, the government has difficulty in listening to suggestions and that’s why the big examination got cancelled. The only ones who are undergoing this are our students who are preparing hard for admission. Numerous students are struggling to get admission to central universities, but the government is playing with their careers.

He added that a new agency should be given the responsibility of conducting CUET. As lakh of students are striving to get admission to universities. Their career and time are very precious.

Besides, Harshad Sharma, Chairman of NSUI National Media said that from the start to today, NTA is not only bad in infrastructure but also it is the most corrupt agency. Various exam papers leak in the states like Gujarat, Uttar Pradesh and Haryana. Thereafter, it shows there is a link between NTA corruption and government ministers. So, we are demanding the resignation of HRD Minister Dharmendra Pradhan.