The president of NSUI, Neeraj Kundan congratulated the first and second-year students of Delhi University on the notice of mass promotion of students by the university.

This notice was up on the DU website on Thursday day i.e. June 4.

They highlighted their constant efforts put by the NSUI students’ Union about writing multiple letters to the education minister, HRD, Delhi University VC, and writing numerous press releases to raise the students’ voices and their concerns. 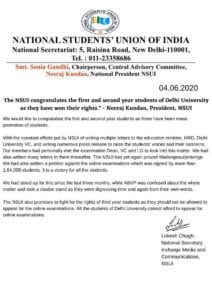 They said their members had personally met the examination Dean, VC, and LG to look into this matter. They also wrote many letters to them thereafter.

They promoted their #ladengeaurjeetenge and said that they have proved it yet again.

They shared that they also wrote a petition against the online examinations and their petition was signed by more than 1,64,000 students.

They declared the war won and said this is a victory for all the students.

They had stood up for the issue for the last three months.

NSUI also further promised to fight for the rights and in favor of third-year students as they should not be put in a situation to appear for the online mode, open-book exams.

They highlighted the issue that all the students of Delhi University cannot afford to appear for online examinations.