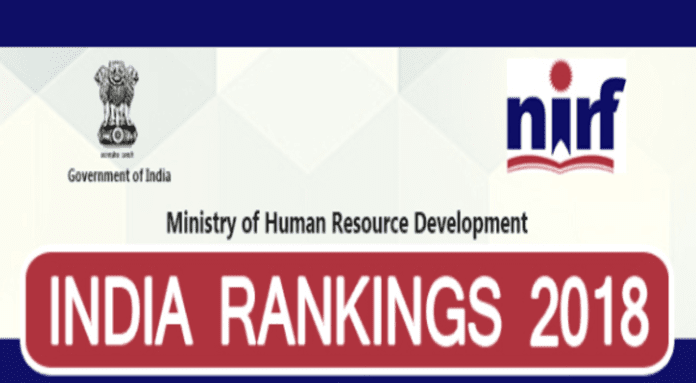 It was mandatory for all the institutes that received public funds to participate in the rankings from this year onwards. Failing to do so would result in some sort of penalty to fund cuts.

NIRF, commonly expanded as The National Institutional Ranking Framework (NIRF), accepted by the MHRD and launched by Honorable Minister for Human Resource development, outlines a methodology to rank institutions across the country. Its various parameters involve teaching and learning resources, research and professional practice, graduation and outcome, outreach and inclusivity and perception.

The colleges and universities that perform exceptionally well on these grounds top the NIRF rankings. The rankings for this year were announced at an event in the Vigyan Bhavan by Prakash Javadekar, Union HRD minister yesterday.

Speaking at the launch, Javadekar said that the idea behind these rankings is to promote quality education and encourage competition to make the institutes perform better and set new benchmarks of performance. Therefore it was mandatory for all the institutes that received public funds to participate in the rankings from this year onwards. Failing to do so would result in some sort of penalty to fund cuts. The highlights from 2018 NIRF rankings are as follows.

Ranked one in the top 10 colleges in India with a score of 71, Miranda house is truly a jewel of the North Campus crown as well. With a rich legacy, the college also possesses some of the greatest people as its distinguished alumni including Anita Desai, Mira Nair etc.

Second, in the list with a score of 70.8, St Stephens is a Christian college under Church of North India and widely regarded as one of the oldest and most prestigious colleges for arts and sciences in India. It is also one of the three founding colleges of Delhi University.

Fourth in the top 10 colleges list published by NIRF, Hindu College is reputed and aims to be consistently dedicated to producing complete citizens. The college also has a girl’s hostel and has its own placement cell, Disha and a separate internship cell, Abhyas.

Attaining 7th NIRF Rank is the famous SRCC, a college dedicated to providing exceptional education in the fields of commerce. It was awarded A+ grade in the first cycle grading by NAAC and also has a boy as well as girl’s hostel. and it is one of the top 10 most happening colleges of Delhi-NCR

8th in the NIRF ranking and also an A+ grade holder in NAAC accreditations, Lady Shri Ram College holds a mission to empower women to assume leadership and describes itself best with the motto knowledge alone liberates us.

Subrahmanyam added, “These rankings will bring transparency to the education system as the institutes are funded by the public. It will also increase the level of competition among them.” Satya Pal said, “We must have healthy competition, become global leaders in education and for that, we must create our own brands so that other countries follow us.” Rankings are given in 7 categories: Overall, Universities, Engineering, Colleges, Management, Pharmacy, Medical, Architecture, and Law.

Indian Institute of Science, Bangalore topped in the overall category. IIT Madras is second and IIT Bombay is third.

JNU stands 2nd and Delhi University is 7th in the universities category. IISc Bangalore continues to be first and Banaras Hindu University, Varanasi is third.

This year for the first time medical and dental colleges were also ranked by the National Institutional Ranking Framework (NIRF). Apart from the medical, NIRF ranking has also added Architecture and Law this year.

National Institute of Pharmaceutical Education and Research, Mohali and Jamia Hamdard, Delhi were first and second in Pharmacy respectively.

For Lawyers, National Law School of India University, Bangalore, and National Law University, New Delhi were first and second respectively while the Symbiosis Law school Pune was 9th in the rank. Jamia Millia Islamia, New Delhi got the 6th position.