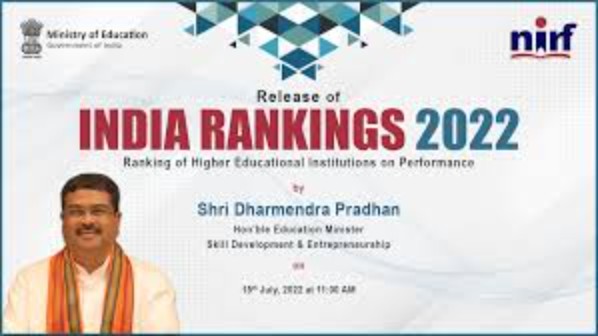 Dharmendra Pradhan is the Union Education Minister. He had released the seventh edition of the National Institutional Ranking Framework (NIRF) ranking 2022.

The officials have set 11 categories under which they have ranked Indian universities. The list is released for overall, management, architecture, pharmacy, university, colleges, engineering, law, medical, dental, and research categories.

Talking about the overall category, IIT Madras holds the first rank, IISc Bengaluru at the second and IIT Bombay holds the third position.

A university category list of NIRF Ranking 2022 is released. Under the list, IISc stood on the first rank. JNU ranks second and Jamia Millia Islamia, third. West Bengal’s Jadavpur University, Amrita Vishwa Vidyapeetham, and Coimbatore are in the preceding positions.

Talking about pharmacy institutions, Jamia Hamdard is in the first position. The National Institute of Pharmaceutical Education and Research, Hyderabad is in the second position. Moreover, Panjab University, Chandigarh holds the third position.

Top Colleges in Delhi according to NIRF Ranking 2022 category

On the other hand, there is a separate list of colleges under the Delhi category. Miranda House, Hindu College, and Presidency College lie in the top 10 positions.