Mool Chand Sharma, a retired council member of the Law Commission of India died in New Delhi. He was also a professor at Law University, Delhi.

As per sources, Prof Sharma passed away late last night after admitting in ICU for consecutive five days. 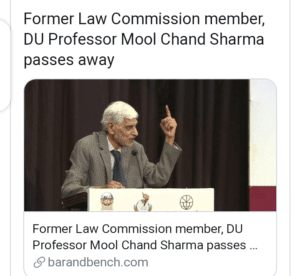 Professor Mool Chand Sharma served as the first VC of Central Haryana University. He also served as Dean in the School of Law at BML Munjal University, Gurgaon.

During the course of his career, he has served in various jobs. As the Vice-Chairperson of the University Grants Commission (UGC), Director of the National Law Institute University, Bhopal, Senior Research Advisor at the National Human Rights Commission, Expert Legal Consultant for the Law Commission of India, and Joint Registrar of Research at the Supreme Court of the nation.

TEACHERS OF DU DISCRIMINATED AGAINST BY THE VARSITY

He completed his Doctorate of Juridical Science (SJD) from North-Western University Law School, Chicago. Also, was an old Fulbright Scholar.

WHAT CHANGES WILL TAKE PLACE IN THE LAW SECTOR OVER THE NEXT DECADE? READ THE SURVEY BELOW