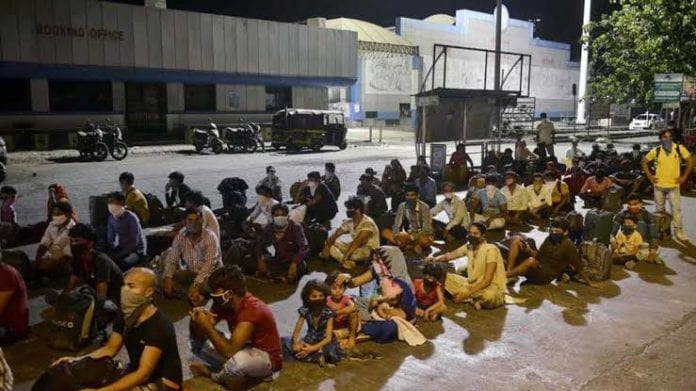 Around 100 people were shifted outside New Delhi railway station after passenger train started entangling. The district authorities shifted the people in relief shelters. The officials confessed that they were also being registered for Shramik trains leading the way to their home states as soon as possible.

Since Tuesday, special trains have been leaving New Delhi railway station to various states. These trains carry thousands of people. The online payment for the tickets of these Rajdhani-type trains has been booked by the migrants. However, the migrant labor are making a long journey on foot, from far junctions of the city and even from Gurgaon, Faridabad, and Noida to the station every day in the expectation of getting on a train back home.
At least 30 such peoples are there who had started staying on the road outside the station entrance.

The district administration started shifting up those camping outside the station and placed them in schools which are now converted into relief shelter, on Friday evening.

On Friday evening, thousands of the migrant people included Pari (20), a trans woman from Uttar Pradesh’s Ballia district who waited outside the station for three nights, had been shifted to a school in Minto Road.

Pari said the authorities came at around 7 pm and brought her and other people to the school on a bus. Their temperature was checked before they could enter and all of them have been getting meals here. Around 20 people from Bihar who had been brought with her have already been put on trains and they are on their way home. She has been told that her turn will come in a day or two.

However, DM (Central Delhi) Nidhi Srivastava authorities authorities are trying to account for people beyond those who had been living by the road. She future added that on Friday evening, they shifted out 75 people and on Saturday morning, they shifted another 25 people. She said they had also told police personnel to refer anybody coming to the station without a ticket to us, and they have made transport available to ferry them to schools. The authorities are registering them for Shramik trains and sending them back to their home states at the earliest and they are also trying to make this possible for people living in the gullies near the station.

Moreover, on Saturday morning, an announcement on a microphone was made by police personnel which includes that the migrants who were stranded in Delhi could board DTC buses present outside the station and avail of this system.