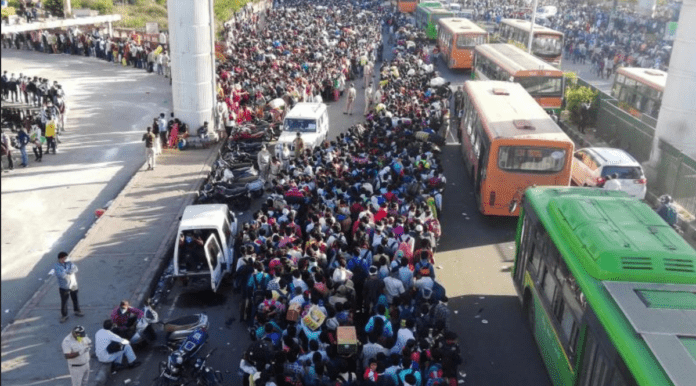 The tremendous rising of the cases of Corona virus led to the major downfall in the economy. Moreover, The Prime Minister of India announced the sudden nationwide lockdown of 21 days. It is a step towards the fight against Corona which every one had to take and people are understanding the depth of this pandemic disease. Prevention is better than cure is now applied by the nation. It is observed that rural to urban migration has increased significantly. Village workers gets magnetized with the facilities provided in the cities. Most importantly, maximized income is the primary reason due to which the workers fit themselves into the world of struggle. As the lockdown was the sudden order given by the Prime Minister, the villages could not move to their hometown. Although each possible facility is being provided by the power holders even if it is about staying or food, many villagers were forced to undertake long journeys on foot to their far-flung homes in the absence of any means of transport. Many of them walked hundreds of kilometres to reach hometowns.

THE CHAOS WAS AT ITS PEAK

It was only a day back that the Uttar Pradesh government had announced that it has arranged around 1000 buses to ferry migrant labourers stranded at the border districts. But this decision went just opposite with the expectations. The crisis reached its zenith when chaos, confusion and stampede-like situation went across the Delhi-Ghaziabad border. The situation was merely handled by the cops. Thousands of migrant workers wanted to reach their families as soon as possible. So they reached at the border to board the bus but it resulted in a very chaotic situation where workers were fighting against themselves for the limited seats in the buses the Uttar Pradesh administration operated. Many of them even travelled on the roof tops after every inch inside was crammed with passengers and their luggage. The urge to go to their families was seen among the workers.

AN APPEAL TO LISTEN AND AGREE

The Chief Minister Arvind Kejriwal appealed to migrant workers leaving the national capital to stay back, even he said that his government has arranged for them to go to their hometown. Deputy CM Manish Sisodia even if the government has deployed 1000 buses for those who attempted to walk home from the city.

The government further exclaimed that they will use school buildings as night shelters for them. They have started providing free food to poverty stricken and needy people at night shelters and schools.

FAILURE OF SOCIAL DISTANCING This chaotic happening at the Delhi-Ghaziabad border failed to promote social distancing which is now a days the only cure for the outbreak of Corona virus. The passengers were facemasks but most of them had handkerchiefs tied over their nose and mouths. This happening further led to quarrel amongst the party members.