The four settings where the metro passengers cannot go out are Supreme Court and Mandi House on the Delhi Metro’s Blue line and Central Secretariat and Khan Market which are on the Violet line.

Giving the reason, a senior officer said that COVID-19 safety standards like wearing masks and social distancing are in place because of the pandemic, so the metros should not get crowded.

In a tweet posted from the DMRC’s official Twitter handle it said, Security Update Exit gates of Khan Market, Supreme Court, Central Secretariat, Mandi House are closed. Entry and interchange are allowed at these stations. 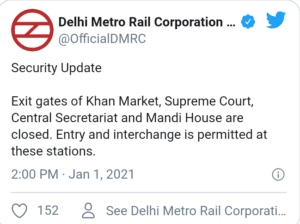 The DMRC’s current functional network spans about 390 km with 285 stations across 11 paths (comprising NOIDA–Greater NOIDA line). On ordinary days, the average daily ridership of the Delhi Metro is more than over 26 lakh.

Last week, The Prime Minister flagged off the first driverless train in India. The metro will run via Margenta Line. Modi said that it is the next step to make a future-ready India with all the modern technologies.