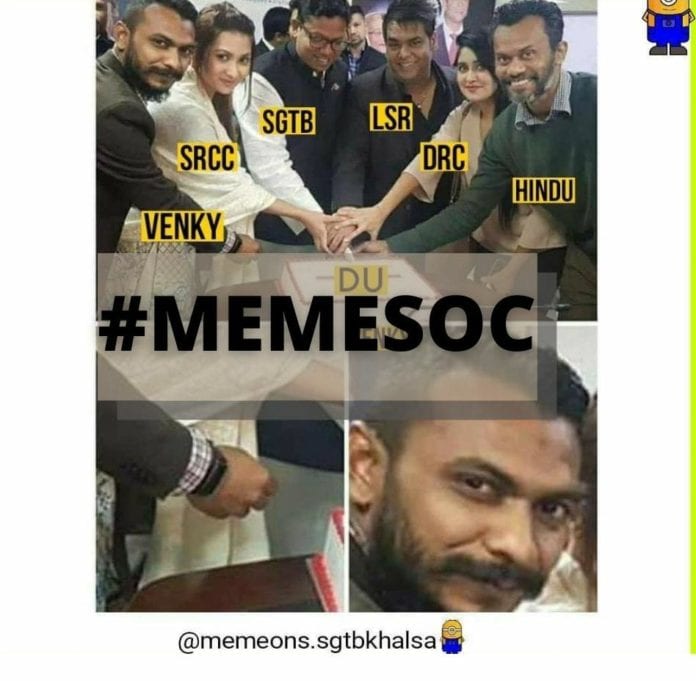 #Memesoc is the first official meme society set up by DU’s SGBT Khalsa College. Memes are the most trending 21st-century concept that has grabbed everyone’s attention. All the social media apps are filled with meme pages and even colleges have their own meme page. Hence, SGBT Khalsa college went a step ahead and created a meme society.

College life is all about societies and fun. Hence, it is a marvelous idea to have a fusion of meme trends and society fun. People have often heard about #musicsoc #dancesoc #dramsoc and more. However, it is the first time hearing about a #Memesoc.

Almost all the colleges run their meme pages on social media. Hence, students from Shri Guru Tegh Bahadur (SGBT) Khalsa College have come up with an innovative idea to form a meme society. Therefore, they are waiting for the college authority’s approval. Once approved, they will get official status.

The #Memesoc was an idea of Bhavishya Bajaj, a final year student at SGBT. He holds the view that meme-making requires skills. Hence, conceptualizing ideas and presenting them as memes are difficult. Bhavishya quotes, “Memes are not only a matter of fun.” Therefore, they are often used to spread information.

Making people laugh is a noble activity. Hence, this #Memesoc will be responsible to spread laughter through hilarious content. However, they will also be propagating significant information in a light yet impactful manner.

Bajaj has been working with her like-minded juniors. Hence, four of them initiated the hustle to form the #Memesoc. They have been managing the work online through virtual meets. The meme society has three wings now – a creative team, a technical team, and a content writing team.

They are sticking to students centric content at first. However, they will incorporate various events and matters in their society work. Also, they are open to public interaction for opinions. Hence, the teachers have conveyed the idea to the principal and are getting a positive response.

DU: AFTER THE DIGITAL DEGREE YOU WILL GET A COPY OF THE FREE OFFLINE DEGREE

Hence, many other colleges are also taking inspiration from this meme society. Hence, #Memesoc is getting a positive response in general.