Twitter user Cat McGee shared that a job applicant had literally added Googling as one of the skills in his CV. Hence, she added that they are going to interview the person. This tweet was shared on July 23 and ever since it is getting thousands of reactions and over 1.8 lakh likes. Also, the post got 19,000 comments and 15,500 retweets.

Social media these days is inundated with creativity and quirky ideas. Hence, job applicants tend to share interesting and quirky resumes in order to get their dream jobs. Thus, a similar creative CV got viral on Twitter where a man added googling as one of his skills.

Cat McGee shares the CV of the man who added googling as a skill:

Along with sharing the man’s resume, the Irish software developer Cat has even declared that she was going to call him for an interview. Thus, an interesting skill on the CV served the purpose of catching attention in order to get a job. But, she added that the man’s overall resume looked great as well.  Here is what the viral tweet looks like: 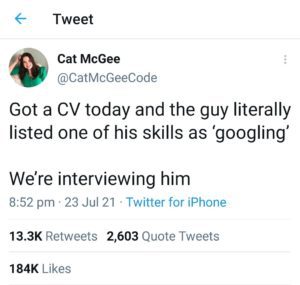 One of the people added that many people can’t actually use Google properly. Technical use of browser is far fetched, people don’t even know the basics. It includes using proper keywords, excluding unnecessary phrases, testing different words, etc. Thus, ‘Googling’ has slowly become an integral part of one’s life and its correct usage is important. The man added that knowing how to search on google properly is a cool skill to have.

ONE PLUS NORD 2 5G| IS IT THE BEST BUDGET PHONE?

Another person added that putting Googling on the resume means it is expected to be well tested. Thus, all skills need proper testing and so does Googling.