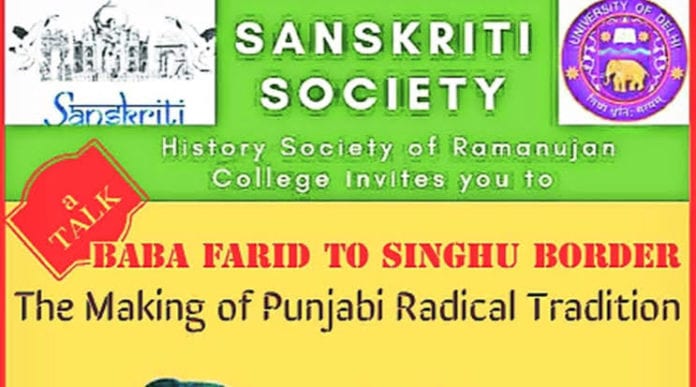 Punjab based historian Sumail Singh Sindhu contended that a lecture on Punjab’s resistant culture was canceled at last minute by the Delhi University’s Ramanujan College authorities.

Sindhu further alleged that the lecture was canceled at last minute due to political pressure on the principals of Delhi University affiliated colleges.

However, the principal of Ramanujan College stated that the session was canceled due to technical reasons.

Sindhu, a Ph.D. scholar in modern history from JNU said that the Ramanujan College’s Sanskriti society planned this lecture and he was supposed to deliver a talk on the history of the resistance culture of Punjab as well as on ongoing farmers’ agitation. However, just fifteen minutes before the commencement of the session, Sindhu was informed by the college authorities that there is an issue with the lecture title and is required to be changed. The lecture was canceled and no logical reason was given in justification of withdrawing the scheduled program. This depicts the political pressure on the University of Delhi by the BJP government, Sindhu asserted.

Sindhu added that the lecture was supposed to cover the elements of Punjabi radical tradition beginning from the conceptual dialogue between Guru Nanak, Kabir, and Baba Farid.

He said that the college authorities must clarify what from among these decided topics was so terrifying or would cause harm to students, that the authorities canceled the lecture last minute that too without a valid reason.

The principal at Ramanujan College, Dr. SP Aggarwal said that there was some problem with the live streaming system of Ramanujan College’s YouTube channel due to which it was canceled last minute.