Large queues were seen at many liquor stores in Delhi today minutes after Chief Minister Arvind Kejriwal announced a six-day lockdown. It will start from 10 pm tonight till 5 am next Monday to fight against the increasing coronavirus cases.

Social distancing was losing, so were masks, as queues grew longer at the shops, photos shared on the Twitter show. 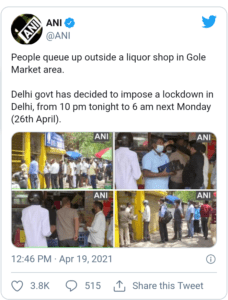 A woman’s comment outside a liquor shop in northeast Delhi’s Shivpuri went viral and was attacked by social media users.

Injection won’t do any better, alcohol will help. Treatments will not be able to help me, only a peg will help, the woman told a reporter in Hindi in an almost one-minute-long video.

Arvind Kejriwal’s strict move came as Delhi became the worst-hit city in India with 25,500 fresh cases on Sunday. Almost one-third of those who tested returned positive. In the last 24 hours, the number of cases remained high despite a dip — 23,500. Total cases in Delhi stand at over 8.5 lakhs.

“I have been drinking for the last 35 years, I have not taken any other dose ever. I drink one peg a day, that is my dose.” The woman, whose face mask had slipped well below her nose, said with a smile.

Public above age of 18 now eligible to get the vaccine: Govt. of India